The first precise measurement of a single molecule's effective charge

Discovery could pave the way to new diagnostic tools 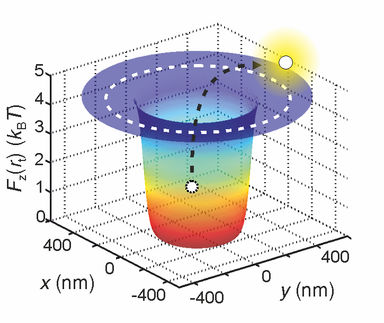 Scientists can determine the effective electrical charge of a molecule by trapping it in a potential well by measuring how long it stays inside.

For the first time, scientists have precisely measured the effective electrical charge of a single molecule in solution. This fundamental insight of an SNSF Professor could also pave the way for future medical diagnostics.

Electrical charge is one of the key properties that allows molecules to interact. Life itself depends on this phenomenon: many biological processes involve interactions between molecules like proteins, where their charge plays an essential role. Yet, the charge of a protein in an aqueous environment – its natural context in a living organism – is hard to determine accurately using traditional approaches.

Madhavi Krishnan, who holds an SNSF professorship at the University of Zurich, has developed a method to precisely measure the charge of a single molecule in solution. Her advance was described in a series of articles in Nature Nanotechnology, Physical Review E and the Journal of Chemical Physics. This discovery could pave the way to new diagnostic tools since, at a chemical level, many diseases are linked to a shift in a protein's electrical charge, which prevents the molecule from acting the way it should.

A molecule's electrical charge can be quite different in the gas phase and in solution. The reason for this difference lies in complex interactions between the object and the surrounding liquid. Hence, standard gas-phase measurements do not directly yield information on the molecule's behaviour in its biological context.

Molecules in solution are in constant motion, randomly kicking each other. Krishnan and PhD student Francesca Ruggeri took advantage of this well-known phenomenon, called Brownian motion, in order to measure the effective charge of a molecule directly in solution.

First, they trapped the molecule in a "potential well". Rather than an actual well, this is a situation where the potential energy of the molecule is at its minimum. In such a situation, bouncing water molecules continuously attempt to expel the molecule from the well.

"It is like kids playing with a ball at the bottom of a pit," explains Krishnan. "The ball is the molecule we are interested in, and the children are the water molecules. The ball would have to receive quite a hard kick in order to fly out of the pit."

"Ultimately it boils down to a statistical principle," explains Krishnan. "If we know how long a molecule remains trapped in the well, we know precisely how deep the well is. And since this depth depends directly on the molecule's effective charge, we can deduce this value very precisely too."

In order to create a potential well, scientists compressed a solution containing the proteins between two glass plates, one of them being covered with microscopic holes. Molecules trapped in potential wells were labelled with fluorescent agents, which allowed them to be tracked with an optical microscope.

While the discovery has important fundamental implications, it could also pave the way towards novel diagnostic tools for many diseases caused by misshaped proteins, such as Alzheimer's and cancers. "We know that the 3D conformation of a protein influences its effective charge, and our work might present a novel route to detecting defective proteins."