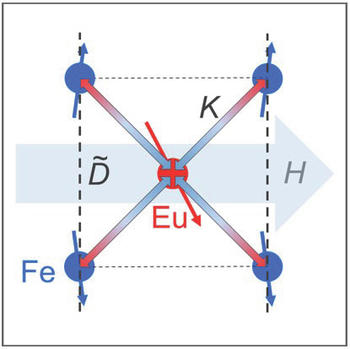 Graphical representation of the magnetic interactions relevant to magnetic detwinning in EuFe₂As₂. Essential is the bi-quadratic coupling between Fe and Eu indicated by blue-red arrows.

In many cases, it is important to be able to take measurements along different directions in the crystal lattice in order to study the physical properties of new materials, such as high-temperature superconductors. However, this requires single crystals without so-called twin domains, i.e., without any internal twists. Iron pnictide superconductors, which are currently being studied intensively, show twin domains, which until now could only be avoided by application of high pressure. This is technically challenging to implement and limits the possibilities of investigation. Recently, a major breakthrough has been achieved: in iron pnictide superconductors with large europium moments, twin domains can be reoriented by small magnetic fields to achieve a mono-domain and fully detwinned single crystal. This surprising and novel effect is based, as has now been elucidated by physicists at the University of Augsburg and the Naval Research Laboratory in Washington (USA), on a special magnetic interaction between the magnetic moments of europium and iron.

Most parent compounds of modern high-temperature superconductors, the so-called iron pnictides, feature a phase transition in which the crystal structure distorts within the tetragonal ab-plane. This distortion leads to the formation of micrometer-sized twin domains, which obscure the in-plane anisotropies of important physical properties. Three years ago, physicists from the Universities of Augsburg, Göttingen, Stuttgart, and San Diego discovered a remarkable effect in EuFe₂As₂. The application of small magnetic fields leads to a reorientation of the twin domain walls at low temperatures, leaving the crystal fully detwinned. It is even possible to switch back and forth between different crystal orientations several times by further increasing the magnetic field.

This effect allows for a better investigation of the directional dependence of the physical properties, which is considered crucial for the understanding of high-temperature superconductivity. However, a necessary and physically meaningful explanation of this effect was so far missing. Two experimental physicists at the University of Augsburg in cooperation with a theoretical physicist from the US have now published a comprehensive quantitative description of this very unusual coupling between the crystal lattice and the applied magnetic field.

The compound EuFe₂As₂ has two types of magnetic moments, which originate from strongly localized 4f orbitals of the europium atoms as well as from predominantly delocalized 3d orbitals of the iron atoms. Since iron pnictides without europium moments show no comparable behavior, it is clear that the latter play an important role. Their coupling to the crystal lattice, however, is much too weak to explain the experimental observations.

The crucial point in the theoretical description was, therefore, the modeling of the interaction between the europium and iron moments. Due to the symmetrical arrangement of the moments in the crystal lattice, the typical, so-called linear Heisenberg coupling is ineligible. By introducing a minuscule biquadratic coupling between the Eu and Fe magnetic moments, which tries to make the two as parallel as possible, all observations are quantitatively described. This is remarkable, as the interaction strength is several orders of magnitude smaller than typical electron and lattice energies.

In addition to the description of the previous experimental observations, the theory published in the journal Physical Review X also predicts further abrupt changes in the crystal orientation in EuFe₂As₂ for very high magnetic fields. First signs of this have already been observed. In general, field-induced detwinning enables a number of new investigation methods to study the directional-dependent properties of high-temperature superconductors. This opens up new possibilities to gain an improved understanding of these fascinating materials.