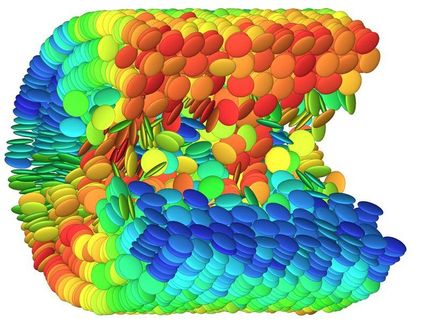 View into a largely ordered liquid crystal in a nanopore.

At DESY's X-ray source PETRA III, scientists have investigated an intriguing form of self-assembly in liquid crystals: When the liquid crystals are filled into cylindrical nanopores and heated, their molecules form ordered rings as they cool – a condition that otherwise does not naturally occur in the material. This behavior allows nanomaterials with new optical and electrical properties, as the team led by Patrick Huber from Hamburg University of Technology (TUHH) report.

There, the liquid crystals were heated to around 100 degrees Celsius and then cooled slowly. The initially disorganized disk molecules formed concentric rings arranged like round curved columns. Starting from the edge of the pore, one ring after the other gradually formed with decreasing temperature until at about 70 degrees Celsius the entire cross section of the pore was filled with concentric rings. Upon reheating, the rings gradually disappeared again.

This change of the molecular structure in confined liquid crystals can be monitored with X-ray diffraction methods as a function of temperature and with high accuracy,” says co-author and DESY scientist Milena Lippmann, who prepared and participated in the experiments at the High-Resolution Diffraction Beamline P08 at PETRA III. “The combination of symmetry and confinement gives rise to unexpected, new phase transitions,” says Marco Mazza from the Max Planck Institute for Dynamics and Self-Organization in Göttingen where the process was modelled with computer simulations. For this purpose, MPI scientist Arne Zantop devised a theoretical and numerical model for the nanoconfined liquid crystals that confirmed the experimental results and helps to interpret them.

The individual rings formed stepwise at characteristic temperatures. “This makes it possible to turn individual nanorings on and off by small changes in temperature,” emphasizes main author Kathrin Sentker from TUHH. She had noticed this phenomenon through surprisingly step-like signal changes in laser-optical experiments. While such quantized changes usually only occur at very low temperatures, the liquid crystal system shows this quantum behavior already well above room temperature.

As the opto-electrical properties of discotic liquid crystals change with the formation of molecular columns, the nanopore-confined variant is a promising candidate for the design of new optical metamaterials whose properties can be controlled stepwise through temperature. The investigated nanostructures could also lead to new applications in organic semiconductors, such as temperature-switchable nanowires, explains co-author Andreas Schönhals from the Bundesanstalt für Materialforschung und -prüfung (BAM), the German Federal Institute for Materials Research and Testing, who is interested in the thermal and electrical properties of these systems.

“The phenomenon constitutes a fine example how versatile soft matter can adapt to extreme spatial constraints and how this can lead to new insights in physics as well as new design and control principles for the self-organisation of functional nanomaterials,” explains principal investigator Huber.