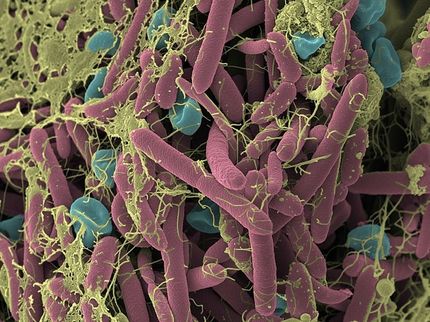 Many bio-plastic bags have no place in the garbage. They dissolve too slowly in oxygen-deficient environments like biogas plants and when incinerated they are a burden to the environment. A research project at the Austrian Centre of industrial Biotechnology (acib) hunts for enzymes, which accelerate degradation and avoid emissions. The aim is to reduce plastic mountains and replace conventional packaging by bio-based polymers.

Only very few know it and we all do it – bio-plastic bags have no place in organic waste collection bins. According to DIN standard EN 13432 biodegradability means that, after a fixed period of time, 90 % of a material have degraded to water, CO2 or biomass under defined temperature, oxygen and humidity conditions in the presence of bacteria or fungi. Lately, part of the bio-waste in plastic bags has been introduced into biogas plants where anaerobic conditions (oxygen-deprived environment) generate biogas as a valuable energy source. “Under these circumstances bags from certain polymer types can only be degraded very slowly. The bio-waste cannot be set free and the process is disrupted”, says Doris Ribitsch, scientist at the Austrian Centre of Industrial Biotechnology (acib). Together with a team in Tulln, she addresses the question if the decomposition of plastic labelled as bio-degradable such as customary bio-waste plastic bags, food packages or mulch foils could perhaps also work in fermentation plants.

First the scientists did some in-silico research. “We screened thousands of entries in an enzyme database to identify certain bacteria, which produce specific enzymes for the degradation of plastic”, says Ribitsch. After some years they were successful. “The bacterium Clostridium botulinum whose proteins are also present in Botox meets all requirements”, declares the scientist, “and small quantities of it are also present in bio-sludge”.

In order to enable the enzymes of bacteria to degrade plastic under anaerobic conditions in a large area, considerable engineering efforts are necessary.

In cooperation with ETH Zurich acib produced an optimized enzyme variant, which was introduced into a biogas testing plant. Up to this time there had been no information on how enzymes from this anaerobic microorganism work and so the scientists developed a method to measure the degradation process of polymers.

First experiments proved to be promising: the enzymes optimized in the lab scattered on the polymer layer and stimulated the degradation process. “Like a large shear they cut the long polymer chains in shorter and shorter pieces until only monomers, the smallest molecular parts, are left. These monomers are then metabolized by microorganisms. Thus, the plastic bags can completely be degraded and converted to valuable biogas together with the bio-waste”, explains Ribitsch.

Considering that about 12% of the worldwide plastic waste (about 45 million tons per year) are incinerated, this new process could mean a turning point for the permanent degradation of plastic. A subsequent project with a company partner is just about to start and two patents have already been filed.

The new method is, however, only an intermediate step on the ecosensitive route to a plastic-free life. “As long as biologically degradable plastics cannot be recycled and reused properly the most reasonable solution is to gather them in biogas plants together with biogenic waste. Thus, the generated energy can at least be used for electricity, heating or bio-methane.”, says Ribitsch. In the long run the project results are expected to replace conventional packaging by bio-based polymers (from renewable resources), which degrade within some days. This would mean to close the carbon cycle and to avoid plastic waste.

If you are now worried that these new plastic bags will decompose on your way home from the shop rest assured. “To decompose they still would need the conditions of compost pile or a biogas plant”, says Ribitsch. No danger for your groceries – and for the environment either, that’s the plan.