Change at the top management of Covestro brought forward

Patrick Thomas retires on May 31, 2018, by mutual agreement 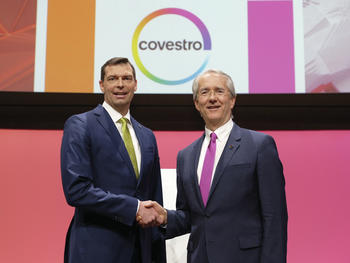 Dr. Richard Pott, Chairman of the Supervisory Board, said: “We have deep respect for Patrick Thomas’ excellent work at Covestro. He has significantly contributed to Covestro’s remarkable success story. Ever since Covestro became independent in 2015, the company achieved record results continuing its profitable growth path until today. Not only the financial metrics are notable: Under his leadership, Covestro developed an independent corporate culture and became a forerunner in innovation and sustainabilty in the chemical industry and a highly attractive employer. I would like to express my sincere gratitude for Patrick Thomas on behalf of the Supervisory Board and all Covestro employees.“

Patrick Thomas has been CEO of Covestro and its predecessor Bayer MaterialScience since 2007. Prior to that, he held various positions across the chemicals industry. Thomas has been taking leading roles in numerous industry associations such as Cefic (Conseil Européen de l'Industrie Chimique / European Chemical Council), WPC (World Plastics Council) and VCI (Verband der Chemischen Industrie). Furthermore, he was president of PlasticsEurope from 2011 to 2017. Patrick Thomas is also a member of the global jury of the ‘Young Champions of the Earth’ competition, an initiative by the United Nations and Covestro for young people to showcase innovative projects to save the environment.

Dr. Markus Steilemann, currently Chief Commercial Officer (CCO), will succeed Patrick Thomas, as announced already in May 2017. With the retirement of Patrick Thomas and Dr. Markus Steilemann becoming CEO of Covestro, the company’s Board of Management will consist of three members. Dr. Klaus Schäfer, whose contract has been renewed in January 2018 until the end of 2022, will continue to act as Chief Technology Officer (CTO). Dr. Thomas Toepfer, Covestro’s new Chief Financial Officer (CFO), came into office on April 1, 2018.