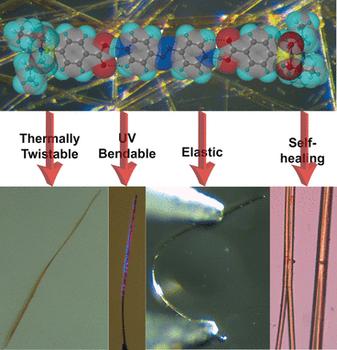 Crystals are brittle and inelastic? A novel class of smart, bendable crystalline organic materials has challenged this view. Now, scientists have engineered a molecular soft cocrystalline structure that bends and twists reversibly and without disintegration when stimulated by high temperature, mechanical force, or under UV light. This multifunctional quality makes it a robust candidate for advanced molecular electronics and other new materials.

Crystal structures can be quite elastic. This notion has emerged only recently, after the first dynamic and adaptive molecular crystals were reported ten years ago. Crystals that can bend without disintegration are attractive materials in microrobotics, flexible electronics, and optical devices. Now, a team of scientists led by Naba Kamal Nath at the National Institute of Technology, Meghalaya, India, and Panče Naumov at New York University, Abu Dhabi, United Arab Emirates have pushed the boundaries of single crystals a bit further. They developed a molecular soft crystal that twists and untwists upon heating and cooling, bends reversibly under UV light, and deforms and reforms responding to mechanical force. Moreover, cracks in the crystals heal themselves over thermal cycling, the scientists noted.

The crystallinity of molecular organic crystals arises from the packing of the molecule layers. These layers are held in place by intermolecular interactions such as hydrogen bonding, hydrophobic interaction, or interactions between aromatic rings. The crystals Naumov and Nath prepared contained two different molecules, probenecid, a drug compound prescribed to enhance uric acid excretion, and 4,4’-azopyridine, a heteroaromatic azo compound that is known to change from an elongated to a more bent conformation when irradiated by UV light. The single crystals formed from these two molecules consist of stacked 2D layers in criss-cross arrangement.

Heating, so the authors found, caused a phase change in this structure, a slight rearrangement leading to different packing angles. The long, thin crystal fibrous sheet twisted. But not for ever. Cooling brought back its original molecular order, and the sheet straightened again. In addition, mechanical bending was possible without cracking, and irradiation with UV light caused rapid, reversible bending.

Not only had the material combined three functionalities—reversible twisting upon heating, elastic bending induced by mechanical force, and rapid, reversible bending under UV light—but it also healed itself: The authors reported that splits and small cracks disappeared when the crystal was cycled between room temperature and elevated temperatures.

These effects amount to a remarkable multifunctionality of the organic crystal. It is thus recommended as a valuable candidate for next-generation solid-state semiconductors, flexible electronics, and other technologies where a combination of apparently contradictory mechanical properties is desired.