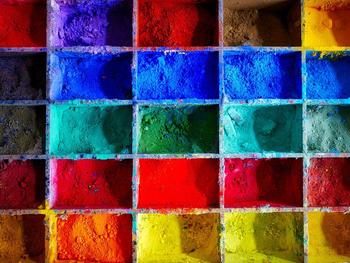 The market research company Ceresana analyzed the entire pigment market already for the fifth time: 10 million tonnes were sold worldwide in 2017. The majority was utilized by the industry in Asia-Pacific. Due to above-average growth rates, demand in this region will presumably rise to almost 6.3 million tonnes until 2025. Reaching market shares of 16.5 % and 13.2 % respectively, North America and Western Europe ranked second and third.

The most important sales market in 2017 was the production of paints and coatings, which accounted for 45% of total global demand. Processing of pigments in plastics ranked second at a considerable distance, followed by the application areas construction material, printing inks, and paper. The use of pigments in the respective applications varies greatly from submarket to submarket. Therefore, this market report divides the regional sales markets “paints and coatings”, “plastics”, and “printing inks” into their most important submarkets.
Classic interior and facade paints for the construction industry accounted for about 2.26 million tonnes. Industrial products are the second largest submarket. Paints and coatings fulfill several purposes in this segment: Besides protection against environmental influences and decorative purposes, they may also be used for electronic insulation in electric products or as oxygen barrier in the packaging of foodstuffs. With an average annual growth rate of 2.7% per year, the transportation industry is one of the most dynamic growth markets for the use of paint and coating pigments.

In the application area plastics, the segment packaging accounts for the major share of the use of pigments with about 1.2 million tonnes. The second largest application area are plastics in the construction industry, followed by industrial applications such as components for the transportation industry, the electrical engineering and electronics sectors, in mechanical engineering, medical technology, and the agricultural industry.
In printing inks, the use of pigments in offset printing dominates with a 53% share of the total printing ink market. Offset printing has become the most important printing process: It is the process of choice in the printing of newspapers and about half of all catalogs are produced using this process. The use of pigments in flexo printing ranks second. It is frequently used for flexible packaging, pulp and nonwovens, labels and corrugated board, cardboard boxes, and films.

Titanium Dioxide Is One of the Most Important Types of Pigments

Worldwide, titanium dioxide (TiO2) accounts for about 60% of total pigment demand. It is mainly used for paints and coatings. Second largest sales market are iron oxide pigments, followed closely by the carbon black market. Iron oxides are the most commonly used inorganic color pigments. Carbon black is mainly used as filler for rubber applications, especially in car tires. However, the present study deals with the use of carbon black as a pigment.
Registering a total volume of less than 1 million tonnes, organic pigments as well as inorganic pigments only account for a small share on global pigment market. However, they are suitable for a wide range of applications. Depending on the chemical composition, inorganic and organic pigments can be distinguished: Organic pigments are based on carbon; inorganic pigments usually are metallic salts. They can also be combined at times. Compared to many other pigments, organic pigments are much more expensive. They are often used for printing inks, followed by paints and plastics.