The force of the vacuum 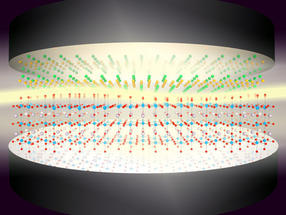 Scientists from the Theory Department of the Max Planck Institute for the Structure and Dynamics of Matter (MPSD) at the Center for Free-Electron Laser Science (CFEL) in Hamburg have shown through theoretical calculations and computer simulations that the force between electrons and lattice distortions in an atomically thin two-dimensional superconductor can be controlled with virtual photons. This could aid the development of new superconductors for energy-saving devices and many other technical applications.

The vacuum is not empty. It may sound like magic to laypeople but it has occupied physicists since the birth of quantum mechanics. The apparent void bubbles incessantly and produces fluctuations of light even at absolute zero temperature. In a sense, these virtual photons are just waiting to be used. They can carry forces and change the properties of matter.

The force of the vacuum, for instance, is known to produce the Casimir effect. When one moves two parallel metallic plates of a capacitor very close together, they feel a microscopically small but measurable attraction between each other, even if the plates are not electrically charged. This attraction is created by the exchange of virtual photons between the plates, like two ice skaters who throw a ball back and forth and are subjected to the recoil. If the ball was invisible, one would assume that a repellent force acts between them.

Now, the MPSD team of Michael Sentef, Michael Ruggenthaler and Angel Rubio has published a study in Science Advances, which draws a connection between the force of the vacuum and the most modern materials. In particular, they explore the question of what happens if the two-dimensional high-temperature superconductor iron selenide (FeSe) on a substrate of SrTiO3 is located in the gap between two metallic plates where virtual photons fly back and forth.

The outcome of their theories and simulations: the force of the vacuum makes it possible to couple the fast electrons in the 2D layer more strongly to the lattice vibrations of the substrate, which swing perpendicular to the 2D layer. The coupling of superconducting electrons and the vibrations of the crystal lattice is a central building block for important properties of many materials.

“We are only beginning to understand these processes,” says Michael Sentef. “For example, we do not know precisely how strong the influence of the vacuum light would realistically be on the oscillations of the surface. We are talking about quasiparticles of light and phonons, so-called phonon polaritons.” In 3D insulators, phonon polaritons were measured with lasers decades ago. However, this is new scientific territory where complex new 2D quantum materials are concerned. “Of course we hope that our work prompts the experimental colleagues to test our predictions,” Sentef adds.

MPSD Theory Director Angel Rubio is delighted about those new possibilities: “The theories and numerical simulations in our department are a key element in a whole new generation of potential technological developments. Even more importantly, it will encourage researchers to reconsider the old problems associated with the interaction between light and the structure of matter.”

Rubio is highly optimistic regarding the role of fundamental research in this area. “Together with the experimental progress, for example in the controlled production and precise measurement of atomic structures and their electronic properties, we can look forward to great discoveries.” In his view, scientists are about to embark on a new era of the atomic design of the functionalities in chemical compounds, particularly in 2D materials and complex molecules. Rubio is convinced: “The force of the vacuum will help us in this quest.”