Save Time and Money When Working with Centrifuges
26-Apr-2019 - Helmholtz-Zentrum Dresden-Rossendorf e. V. 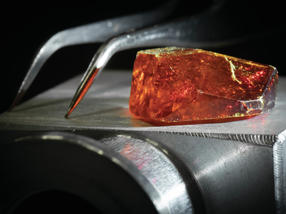 People are not the only ones to be occasionally frustrated. Some crystals also show frustrations. They do so whenever their elementary magnets, the magnetic spins, cannot align properly. Cesium copper chloride (Cs2CuCl4) – or CCC for short – is a prime example of frustrated materials. In this crystal, the magnetic copper atoms reside on a triangular lattice and seek to align themselves antiparallel to each other. In a triangle, this does not work, however. This geometric frustration challenges physicists. After all, it promises the discovery of new magnetic phenomena that may even be used for quantum computers in the future. To better investigate and understand the underlying basics, physicists from the Helmholtz-Zentrum Dresden-Rossendorf (HZDR) in Germany, supported by Japanese and American colleagues, can now control the magnetic coupling using an elegant measuring method.

“Our aim is to elucidate the complex quantum processes in geometrically frustrated crystals in detail,” explains Dr. Sergei Zvyagin from the Dresden High Magnetic Field Laboratory at the HZDR. Theories about the magnetic behavior of crystals such as CCC abound. But so far, sophisticated experiments to test these theories on the object itself have been lacking. To this end, it is helpful to deliberately change the strength of the interactions between the magnetic atoms.

Physicists in many laboratories often take a tedious route: they produce crystals with geometric frustration in a slightly different chemical composition. This changes the magnetic interaction between the elementary magnets, but sometimes also – unintentionally – the crystal structure. Zvyagin left this laborious, purely chemical path to deeper knowledge. Instead, he used high pressures. Under these conditions, the strength of the coupling of the magnetic spins can be changed quasi-continuously.

“With the new method, we can control the coupling parameters within the crystal and simultaneously measure the effects on the magnetic properties,” says Sergei Zvyagin. He received the CCC crystals for his experiments from Dr. Hidekazu Tanaka’s group at the Tokyo Institute of Technology. With an edge length of just a few millimeters and their shimmering orange translucency, they are more reminiscent of bright garnet gemstones than of artificial crystals grown in the laboratory. Also in Japan, at Tohoku University in Sendai, Zvyagin and his colleagues placed the crystals in a high-pressure press with pistons made of high-strength zirconium oxide. The researchers gradually increased the pressure to around two gigapascals – a pressure similar to the one exerted by the weight of a car on a surface the size of a colored pencil lead.

“Under this pressure, the distances between the atoms changed very little,” says Zvyagin. “But the magnetic properties of the crystal showed a drastic change.” The researchers were able to measure these changes directly using electron spin resonance (ESR). They determined the transmittance for light (or more precisely: microwaves) in a very strong external magnetic field of up to 25 Tesla – about half a million times stronger than the Earth’s magnetic field. In addition, the crystal had to be deep-frozen to -271 degrees Celsius, almost to absolute zero, in order to avoid disturbing effects caused by heat.

These measurements in a strong external magnetic field revealed the very unusual magnetic properties of the material. The researchers were able to vary the strength of the coupling between neighboring magnetic spins by changing the pressure. Further measurements using an additional method from materials research – the tunnel diode oscillator (TDO) technique – complemented these results. The TDO measurements were carried out – also under high pressures and in strong magnetic fields – at the Florida State University in Tallahassee.

In addition, Zvyagin and his colleagues found evidence that CCC under high pressure exhibits a cascade of new phases with increasing magnetic field, absent at zero pressure. “Thanks to these measurements, we are now a step further towards better understanding the variety of these phases,” says Professor Joachim Wosnitza, head of the Dresden High Magnetic Field Laboratory.

“The exact identification of these phases is one of our next targets,” says Zvyagin. In the future, he intends to determine the exact structures of his CCC crystals by means of neutron scattering. For these plans, he appreciates the excellent research conditions offered by the HZDR with its close international network. “For me, it is an ideal place for my interest in fundamental research,” says the physicist. “And if we understand the quantum processes in these crystals with frustrated geometry, applications could also emerge.”

Joachim Wosnitza also sees great potential in the exotic magnetic properties of these crystals. “One could imagine long-lived quantum systems in which the magnetic spins can be used in a controlled manner,” says Wosnitza. “Whether this will then lead to a quantum computer or a special sensor cannot yet be anticipated, however.” The road to such applications could still be very long. But with their successful measurements, the HZDR researchers have no reason to be frustrated – unlike their crystal samples.