Chemicals from carbon dioxide – with plasma and perovskite membranes 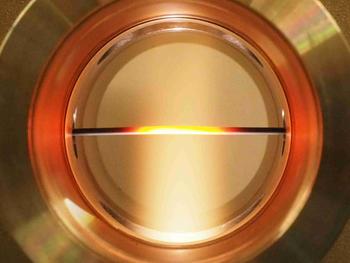 Test reactor for ceramic capillary membranes in a microwave plasma.

Researchers at the Fraunhofer Institute for Interfacial Engineering and Biotechnology IGB and the University of Stuttgart aim to use the climate-damaging greenhouse gas carbon dioxide as a raw material for the production of chemicals. To do this, they are developing a combined plasma and membrane process that splits CO2 into oxygen and the chemical base material carbon monoxide. The process is made possible by the separation of oxygen using a new perovskite capillary membrane. This membrane is CO2-stable and permeable for oxygen at 1000°C.

The global near-surface air temperature has already risen by around 1°C compared with the average in the 20th century, and the upward trend is continuing. The consequences: The ice at the poles is melting, glaciers are disappearing, sea levels are rising. In Germany, too, heatwaves and droughts as well as severe thunderstorms and heavy rainfall are on the increase. One of the main greenhouse gases responsible for global warming is carbon dioxide (CO2) from the combustion of oil, coal and natural gas.

Scientists at the Fraunhofer Institute for Interfacial Engineering and Biotechnology IGB and the Institute for Interfacial Process Engineering and Plasma Technology (IGVP) of the University of Stuttgart now want to tackle this problem by using the climate-damaging gas as a raw material for the production of chemicals and chemical energy storage systems. In the project “PiCK – Plasma-Induced CO2 Conversion for the Storage of Renewable Energies”, which is funded by the German Federal Ministry of Education and Research as part of the “Kopernikus projects for the Energiewende”, they have been researching for two years a new approach that uses excess electricity from regenerative sources and combines plasma with membrane technology.

The idea: Carbon dioxide is split in a plasma, i.e. an ionized gas with highly reactive  species. This produces oxygen and carbon monoxide (CO). Carbon monoxide is a chemical raw material that can be converted into base chemicals and chemical energy stores such as methanol or methane in existing infrastructures using conventional chemical processes. To prevent carbon monoxide and oxygen from reacting back to carbon dioxide, a new heat- and CO2-stable membrane separates oxygen.

Scientists at the Institute of Interfacial Process Engineering and Plasma Technology (IGVP) at the University of Stuttgart have developed an electrodeless reactor to carry out the carbon dioxide splitting. Here, an atmospheric pressure plasma – excited by a microwave – is generated by means of strong electric fields. “If electrons excited in this plasma collide with CO2 molecules, this causes CO2 to decompose into the desired products carbon monoxide and oxygen," explains IGVP scientist Dr. Andreas Schulz, who coordinates the project.

Perovskite membrane for the removal of oxygen

To prevent CO from reacting back with the oxygen produced in the plasma to form CO2, oxygen must be constantly removed from the reaction equilibrium. For this purpose, Fraunhofer IGB has developed a new ceramic membrane that can selectively separate oxygen. “Since the membrane must be temperature- and CO2-stable at the same time, we spin special ceramic materials, so-called perovskites, together with polymers into a thin-walled capillary,” explains Dr. Thomas Schiestel, membrane expert and project manager at Fraunhofer IGB. The resulting green fiber is sintered at high temperatures to form a dense ceramic capillary membrane. “Our perovskite membrane is stable in a CO2 atmosphere and permeable for oxygen at temperatures of 800 to 1000°C, but not to carbon monoxide and carbon dioxide,” says the Fraunhofer researcher. Such a membrane has not previously been described.

The researchers have already demonstrated that the idea of the combined plasma-membrane process works in the plasma reactor developed at IGVP. Using a special apparatus in the plasma reactor, the capillary membrane is adjusted at a precisely defined point in the plasma flame. By controlling the CO2 gas flow and microwave power, the temperature of the plasma at the membrane level is set to 800 – 1000°C, so that oxygen can pass through optimally.

Under these conditions, the new capillary membrane showed both very good thermal stability and very good oxygen permeability. At a kilowatt microwave output that corresponds to a temperature of around 1000°C, 2.3 milliliters of oxygen per minute and square centimeter of membrane surface were separated. Up till now, around one third of the microwave energy has been converted into chemical energy and 22 percent of the carbon dioxide has been split.

Both the process and the plasma membrane reactor can be easily scaled and flexibly controlled, which is a great advantage for the technical implementation. “The operation of the plant can be adapted to the available regenerative energy resource and react quickly to the current energy supply,” says Schulz. The next step on the way to demonstrating the technical feasibility is to increase the separation efficiency of the plasma membrane reactor. “For such a scale-up, we increase the number of capillary membranes built into the plasma,” says Schiestel. In combination with improved gas management, it should also be possible to further increase the energy efficiency of the process.

The process can be used wherever CO2 is produced in enriched form: in combustion processes in power plants, in the cement and glass industries, and in breweries where CO2 is a by-product of alcoholic fermentation. The use of CO2 as a raw material can thus help to conserve natural resources and protect the climate. The researchers are already looking for interested companies for the further development in a second funding phase and the subsequent technical implementation.