Catalytic converter with a green profile 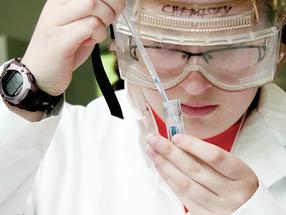 Iron could prove to be a “green” alternative to precious metals in the chemical industry.

With the support of the Austrian Science Fund FWF, the chemist Zita Csendes has defined and tested iron complexes as a sustainable, inexpensive and efficient alternative to precious-metal catalysts. The shift from catalyst solution to reusable pore coating required mastering many chemical parameters.

Catalysis means using a catalyst to assist a chemical reaction, i.e. initiating or accelerating the reaction or increasing the output of the final product. Not a human invention, this principle is also widely observed in natural processes where enzymes act as catalysts. Ideally, the catalyst is not converted during the reaction, but recovered. Today, precious-metal catalysts (ruthenium, iridium or rhodium) are routinely used in the production of active pharmaceutical ingredients, as well as in fragrances and flavourings. While performing their tasks to perfection, these catalysts are toxic, difficult to obtain and expensive. Researchers are therefore working on finding solutions in the medium term using more environmentally friendly and cheaper alternatives in the spirit of “green chemistry”.

Catalysts are optimised with regard to the desired reaction type (what type of chemical effect is intended), the chemical selectivity (where exactly in the molecule should it or should it not act), the production process (batch process or continuous production) as well as the reusability of the catalyst or the purity of the end product. In a Lise-Meitner project funded by the Austrian Science Fund FWF and conducted at TU Wien (Vienna University of Technology), Zita Csendes defined, controlled and tested iron complexes as alternative catalysts. The choice of iron is explained by the fact that it is the most common metal found in the earth’s crust, and it is also inexpensive and non-toxic.

Coating instead of dissolving

In order to bring the catalyst closer to production in a continuous process, the research team anchored it to the pores of a silica gel as a coating. The chemical properties of several of the reactants involved had to be coordinated and the conversion processes optimised step by step in order to ensure that only desired chemical reactions take place at the desired sites in a molecule. The researcher then tested the interactions and activity of the catalysis with a standardised test reaction and with nuclear magnetic resonance and infrared spectroscopy.

Ionic solution as anchor and buffer

Zita Csendes found that the silica gel will destroy the iron complex catalyst when brought into contact with it. Hence, she experimented with ionic solutions to inhibit interfering processes and to coat the silica gel with a reactive catalyst layer. “We gradually approached the ideal combination where the pores are moistened but not completely filled and where neither the catalyst nor the ionic solution drains into the reaction solution,” she notes in explaining the complex and ultimately successful procedure. She also identified the best ion combination in the solution.

Csendes is the first researcher able to publish a well-defined, chemoselective iron catalyst for the hydrogenation of aldehydes. The experiments also suggested that the catalyst could work well not only in batch production, but also in a continuous production process.