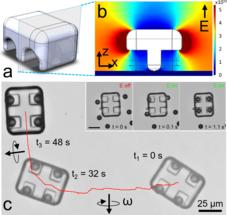 Building a robot with many different components is a challenging task, even more so at the micro scale. Very convenient, if the parts self-assemble.

The self-assembly of particles is nothing new. In fact, it has been achieved for decades. Magnetic particles interacting under rotating magnetic fields self-assemble, as do components bound together through chemical reactions. Bacterial microswimmers are one example of this. However, the end result of these self-assembled micromachines has been very limited – until now.

Scientists at the Max Planck Institute for Intelligent Systems in Stuttgart (MPI-IS) have taken a new approach in self-assembling not one, but many different shaped machines only 40 to 50 micro meters in size – about half the diameter of a human hair. They proved that programmable self-assembly of their micromachines is possible solely through the design and structure of the individual components: by making use of dielectrophoretic forces that evolve around the individual parts when exposed to an electric field. In this environment, the design and structure of the machine frames on the one hand and magnetic actuators on the other allow their controlled configuration, making the assembly programmable. The scientists’ ground-breaking research, Shape-encoded dynamic assembly of mobile micromachines, was published in Nature Materials on June 24, 2019. Berk Yigit, a Ph.D. student in the Physical Intelligence Department at the MPI-IS, and Yunus Alapan, a postdoc and mechanical engineer working in the same department, are both lead authors. Metin Sitti, Director at the MPI-IS and head of the Physical Intelligence Department, is the last author.

“We take advantage of the shape- and material-specific forces in a non-uniform electric field,” Alapan explains. “The shape of the machine frame on the one hand and actuators on the other dictate the surrounding gradients. These cause a pulling-force between the units assembling the micromachine. By changing the shape, we control how these gradients are generated and hence how the components are attracted to one another.”

“The components of our micromachines can move relative to each other, which gives another level of complex locomotion,” Yigit says. “Imagine the wheels of a car rotating but the chassis stays unchanged: the car moves forward and can go in many directions. Instead of forming rigid connections, each part can move individually.”

The individual components were built through a special 3D printing method using two-photon lithography. “Our first design was a microcar, as an homage to the ubiquity of wheeled propulsion in our lives,”Alapan continues. “We fabricated the 3D frame or chassis with its wheel-pockets, as this structure generates very attractive gradient forces for the magnetic microactuators – the wheels. Within seconds of applying the electric field, the wheels self-assembled into these pockets!” The researchers then steered the microcar by a vertically rotating magnetic field, as can be seen here.

Alapan and Yigit tried many different component sizes and shapes, and their tiny self-assembled robots come in many varieties: The researchers were able to build a microcar, a microrotor, something that resembles a small rocket, and even a micropump. While it is rotating, magnetic particles at the pump’s periphery are moved upwards along its spiral. This causes a pumping effect when one micropump is close to another. The researchers further showed that not only can they assemble motor and structural parts in a configurable way, forming microrobots, they can also assemble several microrobots together, paving the way for hierarchical multi-robot assemblies.

Being able to move in many different ways is of huge benefit: It could determine whether or not such micromachines could one day be deployed to deliver drugs or sense tumor cells inside the body, where versatile locomotion is key.

Self-assembly to build micromachines of many different shapes and sizes will have a great impact on the scientific community, the scientists believe. “Mobile sensing, in vitro targeted drug delivery, single cell manipulation, and precise actuation at this scale are great challenges. This new approach could reduce the complexity of these tasks”, says Sitti.