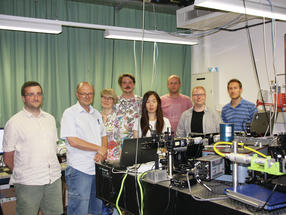 One day superconductors could revolutionize energy industry. However, for this to be happen, superconductors must be able to transport electricity under room temperature without resistance. Metal hydrides differ from other superconductors by the fact that they do not own this ability only at extreme coldness, but already at deep fridge temperatures. This is caused by atomic processes which a research team of the University of Bayreuth has uncovered for the first time. The research results published in “Physical Review X" contain valuable points of departure for the development of technologically attractive superconductors.

During the last five years, few scientists have successfully employed very high pressures in order to produce metal hydrides, rich in hydrogen, which become superconductive at deep fridge temperatures (around minus 20 degrees Celsius). This so-called transition temperature of metal hydrides is therefore considerably higher than that of other materials which become superconductive only at minus 200 degrees Celsius. What causes metal hydrides to behave differently was unknown for a long time. Now, however, the research team from the Bavarian Geoinstitute (BGI) and the Laboratory of Crystallography at the University of Bayreuth have shown experimentally and described theoretically that hydrogen atoms in metal hydrides start to interact to each other at high pressures. This knowledge could well lead to a deeper understanding of the superconductive state and its origin.

”We now have a valuable starting point for the design of metal hydrides which become possibly superconductive at even higher temperatures. With new technology of high-pressure research in the Bavarian Geoinstitute, we can synthesize these materials and check our predictions directly on site empirically. The measurements under high pressure will have, in turn, an impact on our theoretical assumptions. Thereby they allow increasingly exact predictions of the atomic processes which put metal hydrides into a superconductive state“, says Dr. Thomas Meier, the leader of the Bayreuth research team.

The vision of the Bayreuth researchers reaches far into the future: Based on the interplay of theoretical predictions and empiric measurements, they want to synthesize new materials and thereby achieve transition temperatures which get closer to normal ambient temperatures. One day these materials could make a decisive impact on electric energy transport. Even then one more hurdle is still to be taken: The metal hydrides, which have turned out to be superconductive so far, possess this ability only as long as the high degree of compression persists under which they have originated. As soon as pressure decreases, the materials disintegrate. However, only if superconductors prove to be stable under normal conditions, they are an interesting option for technological applications.

The research results on atomic processes in metal hydrides which have been published now could only be achieved because the Bayreuth researchers have combined two research technologies: generating high-pressure as it is known from the geosciences and materials physics, and nuclear magnetic resonance spectroscopy (NMR). For achieving this combination, the Bavarian Geoinstitute of the University of Bayreuth was selected in 2018 as one of ”100 excellent places in the country of the ideas“. It was largely due to the synergy of the high-pressure research expertise collected in Bayreuth and proficiency in NMR of Dr. Thomas Meier that these research technologies could finally be brought together.