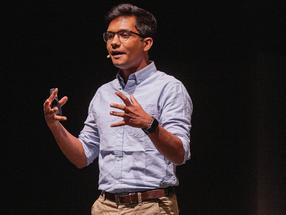 “I have been participating in science slams since 2015. At the beginning, I just wanted to find a way of practicing my presentation skills and getting to know new research fields. Being the European champion now, is a great honour for me”, explains Dutta. Dutta comes originally from India and has joined the MPIE in 2016 in the group “Mechanism-based Alloy Design”, after completing his master studies at the RWTH Aachen University. He will finish his PhD on medium manganese steels this year. In his slam “Think in terms of an Auflauf” (“Auflauf” meaning “casserole”) Dutta explained the concept of high entropy alloys. This kind of alloys consists of more than five different elements in equal proportions, giving special properties to the bulk materials.

During science slams, scientists present their research topics within a few minutes to an audience, which then decides the winner by an applause or score cards. The slammer that explains their research in the most understandable and entertaining way, wins the slam. The aim is, on the one hand to enable young scientists to present their current research project and develop their presentation skills. On the other hand, science slams aim to awaken the general public's interest in science.