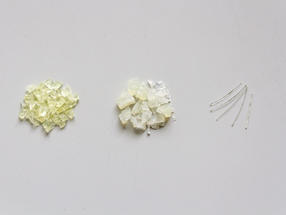 From wood waste to high-performance polymers: Terpenes from turpentine oil are converted to biobased, heat-stable polyamides.

The Fraunhofer Institute for Interfacial Engineering and Biotechnology IGB has developed a sustainable alternative to petrochemically produced plastics using terpenes found in resin-rich wood. The natural substances are available from conifers such as pine, larch or spruce. In the production of pulp, in which wood is broken down to separate the cellulose fibers, the terpenes are isolated in large quantities as a by-product, turpentine oil.

In the joint project “TerPa – Terpenes as building blocks for biobased polyamides” funded by the German Federal Ministry of Food and Agriculture (BMEL) through the German Agency for Renewable Resources (FNR), researchers of Fraunhofer IGB, Bio, Electro and Chemocatalysis BioCat, Straubing branch have succeeded in optimizing the synthesis of lactams from 3-carene and the subsequent polymerization to Caramid-R® and Caramid-S®, representatives of a new class of terpene-based polyamides. Recently, a patent was granted for the synthesis process of the new polyamides from terpenes.

The conversion of 3-carene to the corresponding lactam is possible in four successive chemical reactions that require neither complex production facilities nor expensive reagents. The key steps to the polymer building blocks 3S- and 3R-caranlactam are the selective production of the intermediate 3S-caranketone and its selective rearrangement to the isomeric 3R-caranketone.

The special feature is that the conversions can take place as a one-vessel reaction sequence in a single reactor. "This offers the possibility to produce the lactams also in simple plants without a complex reactor cascade. It is not necessary to purify the intermediate products," explains Paul Stockmann, who developed and optimized the promising process.<

The synthesis of the monomer for Caramid-S® has now been scaled to the 100-liter scale at the Fraunhofer Center for Chemical-Biotechnological Processes CBP, the Leuna branch of Fraunhofer IGB. "In this pilot production, we produced several kilograms of monomer, which allows the polymerization to be scaled to the kilogram scale," says Dr. Harald Strittmatter, who heads the TerPa project.

The chemical structure of the natural substance 3-carene, which has barely been used commercially to date and would be very difficult to access from petrochemical feedstocks, leads to new polyamides that contain cyclic structures along the polymer chain. Due to these rings and other substituents, Caramid-S® and Caramid-R® have exceptional thermal properties compared to standard polyamides: The softening temperatures (glass transition) are above 110 °C.

In addition, the scientists have converted the biobased lactams to copolymers with other commercially available monomers – laurolactam for PA12 and caprolactam for PA6. This enables the possibility of changing the properties such as the transparency of the polyamides PA6 and PA12, thus extending their application profile.

Currently, the Fraunhofer scientists are working on further improvements of the monomer synthesis which is essential for an economically viable polyamide. Furthermore, they are investigating the properties of the polymers in detail to identify potential applications and implement commercial use of the biopolyamides together with industrial partners.