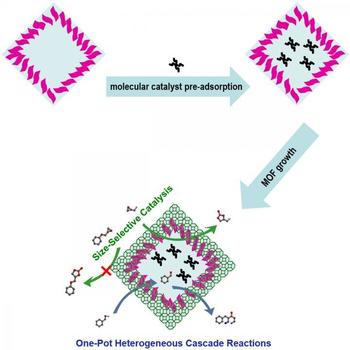 Homogeneous molecular catalysts are highly active and selective as they possess well-tailored structures and accessible sites. Unfortunately, the difficulty related to catalyst recovery impedes their practical application. The encapsulation of them inside hollow porous solid materials is a judicious solution. While a number of reports on stabilizing homogeneous catalysts to solid supports, including porous polymers/silica/carbons, and zeolites, etc., it remains significant challenge with regards to the dilemma in the integration of respective advantages of homogeneous and heterogeneous catalysts without compromised catalytic performance of the former and porosity of the latter.

Typically, the previous shells are usually assembled by imperfect particle packing and feature additional interparticle pores that are not able to encapsulate small homogeneous active guests. The attempts on endowing the resulting composite catalysts with additional features (for example, substrate enrichment, selective catalysis, cascade catalysis, etc.), beyond the simple recombination of classical merits of homogeneous and heterogeneous catalysts, has never been reported yet.

In the present work, the authors have developed a template-directed approach for the construction of various hollow metal-organic framework (MOF) capsules with a continuous shell and size-selective permeability, which are useful in sealing up diverse soluble active species.

This novel template-directed process is straightforward and versatile (diverse MOFs, such as ZIF-8, ZIF-67, MOF-74, etc., are applicable) for the fabrication of various MOF capsules with a dense, stable and thin MOF shell, which eliminate additional interparticle pores/defects in previous reports on hollow porous capsules. During the synthetic process, different soluble active species can be readily encapsulated into the interior cavity of the hollow MOF capsules, thus making the synthetic approach very powerful and extendable.

The resultant yolk-shell MOF capsules exhibit superior activity to the individual bulk MOF and the guest active catalyst, benefiting from the synergistic effects between the high intrinsic activity of the molecular catalyst and substrate enrichment effect of the crystalline MOF shell. Moreover, the perfect MOF shell endows the resultant composites with substrate enrichment, size-selectivity, great recyclability, and multifunctional cascade catalysis.