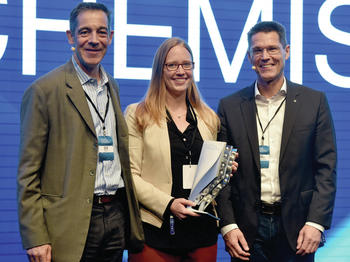 This year’s international Science Award Electrochemistry was presented to Dr Kimberly See of the California Institute of Technology (Pasadena, California, USA). She was honoured at the Science Award Electrochemistry & Science Dialogue held in Wolfsburg’s Autostadt. The award has been presented seven times as a joint initiative of Volkswagen and BASF and is aimed at young scientists of excellence. Prizes total €70,000, of which €50,000 is awarded to the overall winner.

Kimberly See was recognised by the six-member jury of experts for her outstanding contribution to research into multivalent ion and sulphur batteries. She was selected out of four other applicants for the science award presented by Volkswagen and BASF.

Frank Blome, Head of the Center of Excellence (CoE) for battery cells at Volkswagen, explained at the award ceremony: “Close collaboration with scientists is critical for Volkswagen in order to continue to optimise our energy accumulators. High-performance batteries are the key to the success of electric mobility. That is why we are focussing on research and development into electrochemical battery concepts for the next generation and beyond.”

Dr. Detlef Kratz, President of Research for Process Research and Chemical Engineering at BASF, emphasised: “BASF is conducting intense research into innovative cathode materials for lithium-ion batteries that will help increase the range of electric vehicles and shorten charging times. In addition to the development of high-performance materials, we also have to consider issues such as suitable recycling options for batteries, the responsible use of resources and a sustainable supply chain.”

‘Science Dialogue’ about the latest trends in battery research

The award ceremony was preceded by a two-day event attended by top experts from science and industry, including this year’s Nobel Prize-winner for chemistry, Professor Dr. Stanley Whittingham. The experts discussed the battery materials of the future, alternatives to raw materials such as lithium, sustainable cell production for lithium-ion batteries and the role of digitalisation in the development of new materials. The designated Nobel Prize-winner in chemistry, Professor Dr. Stanley Whittingham, believes that lithium will continue to be the main material used for batteries for the next two decades. “But we need to be able to double the energy density and range with the same size of battery we currently have. And hopefully the price will stay the same as it is now. This means reducing costs, increasing energy density and increasing safety. Such battery cells will be available to everyone”, said Whittingham in an interview at the event.

The guests also visited the Center of Excellence (CoE), the newly opened pilot plant for battery research at Volkswagen’s Salzgitter site. In addition, they discussed the latest findings in research and development, specifically in the automotive industry. For Volkswagen, as the leader of the ‘electric offensive’ in Germany, together with BASF, one of the world’s leading manufacturers of cathode materials for lithium-ion batteries, these topics are of special significance.

Award as a catalyst

The Science Award Electrochemistry was initiated by BASF and Volkswagen in 2012. The goal is to support excellence in the natural and engineering sciences and provide a catalyst for the development of high-performance energy accumulators.