The power of attraction 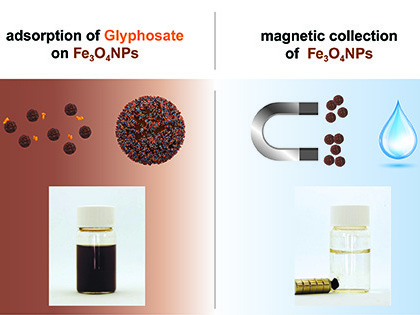 The diagram shows the method used by the FAU research team. The glyphosate dissolved in water is bound to iron oxide particles (left). A magnet is used to filter the glyphosate-iron oxide complex out of the water.

Glyphosate is not only one of the most widely-used herbicides in the world, but also one of the most controversial chemical compounds, as it is suspected of being carcinogenic. In a study published in the journal Nature Sustainability, a team of researchers from FAU have demonstrated how glyphosate can be removed from water using a straightforward technique.

The FAU team led by the material scientist Prof. Marcus Halik from the Interdisciplinary Centre for Nanostructured Films (IZNF) and physicist Prof. Dirk Zahn from the Computer Chemistry Centre (CCC), and the team led by Dr. Leena Banspach from the Bavarian Health and Food Safety Authority (LGL) use the chemical structure of glyphosate, which interacts strongly with oxidic surfaces, in order to bind the herbicide to magnetic iron oxide particles. The particles can then be filtered out of the water using a magnet.

Tests in the laboratory have demonstrated just how effective this method is. In a wide variety of different samples, researchers succeeded in reducing levels of glyphosate to the strict limit of 0.1 microgrammes/litre dictated by the European Drinking Water Directive, and in many cases even to remove the glyphosate to such an extent that it could no longer be detected.

The high degree of efficiency was not only observed in experiments in the laboratory, however. The group led by Prof. Dirk Zahn succeeded in using molecular dynamics simulations to demonstrate the theory behind the results: compared to other substances dissolved in water, glyphosate binds particularly well to iron oxide particles.

The predicted selectivity was then confirmed in experiments conducted on water samples taken from the Dechsendorfer Weiher – a lake near Erlangen – which contained a low concentration of glyphosate (~ 0,6 microgrammes/litre) as well as other organic contaminations. After adding iron oxide particles to the water and removing them using magnets, the water from the Dechensdorfer Weiher had the quality of drinking water, at least with respect to glyphosate.

As iron oxide particles are available at a low cost and the magnetic particles can be used several times over, the procedure is both ecologically sustainable and economically feasible. The objective is not to use iron oxide particles on a major scale, however, but rather to develop a toolkit which can be used to tackle extreme concentrations on a local level quickly and at a low cost. 700,000 tonnes of glyphosate are still being produced, stored and used every year, entailing a significant potential for risk if handled inappropriately.