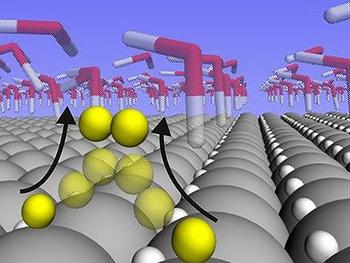 A new study shows that hydrogen atoms are loosely bound and highly mobile on the surface of a platinum catalyst during the water splitting reaction. The findings explain why platinum is so good at catalyzing this particular reaction, and could aid in the design of catalysts made of materials that are cheaper and more plentiful than platinum.

Scientists have long known that platinum is by far the best catalyst for splitting water molecules to produce hydrogen gas. A new study by Brown University researchers shows why platinum works so well -- and it's not the reason that's been assumed.

The research, published in ACS Catalysis, helps to resolve a nearly century-old research question, the authors say. And it could aid in designing new catalysts for producing hydrogen that are cheaper and more plentiful than platinum. That could ultimately help in reducing emissions from fossil fuels.

"If we can figure out how to make hydrogen cheaply and efficiently, it opens the door to a lot of pragmatic solutions for fossil-free fuels and chemicals," said Andrew Peterson, an associate professor in Brown's School of Engineering and the study's senior author. "Hydrogen can be used in fuel cells, combined with excess CO2 to make fuel or combined with nitrogen to make ammonia fertilizer. There's a lot we can do with hydrogen, but to make water splitting a scalable hydrogen source, we need a cheaper catalyst."

Designing new catalysts starts with understanding what makes platinum so special for this reaction, Peterson says, and that's what this new research aimed to figure out.

Platinum's success has long been attributed to its "Goldilocks" binding energy. Ideal catalysts hold on to reacting molecules neither too loosely nor too tightly, but somewhere in the middle. Bind the molecules too loosely and it's difficult to get a reaction started. Bind them too tightly and molecules stick to the catalyst's surface, making a reaction difficult to complete. The binding energy of hydrogen on platinum just happens to perfectly balance the two parts of the water-splitting reaction -- and so most scientists have believed it's that attribute that makes platinum so good.

But there were reasons to question whether that picture was correct, Peterson says. For example, a material called molybdenum disulfide (MoS2) has a binding energy similar to platinum, yet is a far worse catalyst for the water-splitting reaction. That suggests that binding energy can't be the full story, Peterson says.

To find out what was happening, he and his colleagues studied the water-splitting reaction on platinum catalysts using a special method they developed to simulate the behavior of individual atoms and electrons in electrochemical reactions.

The analysis showed that the hydrogen atoms that are bound to the surface of platinum at the "Goldilocks" binding energy don't actually participate in the reaction at all when the reaction rate is high. Instead, they nestle themselves within the surface crystalline layer of the platinum, where they remain inert bystanders. The hydrogen atoms that do participate in the reaction are far more weakly bound than the supposed "Goldilocks" energy. And rather than nestling in the lattice, they sit atop the platinum atoms, where they're free to meet up with each other to form H2 gas.

It's that freedom of movement for hydrogen atoms on the surface that makes platinum so reactive, the researchers conclude.

"What this tells us is that looking for this 'Goldilocks' binding energy isn't the right design principle for the high activity region," Peterson said. "We suggest that designing catalysts that put hydrogen in this highly mobile and reactive state is the way to go."