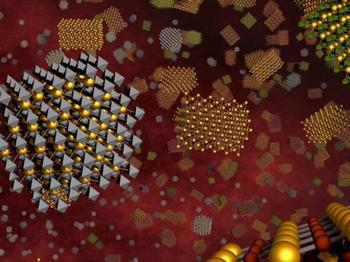 Researchers at Columbia University and University of California, San Diego, have introduced a novel "multi-messenger" approach to quantum physics that signifies a technological leap in how scientists can explore quantum materials.

"We have brought a technique from the inter-galactic scale down to the realm of the ultra-small," said Basov, Higgins Professor of Physics and Director of the Energy Frontier Research Center at Columbia. Equipped with multi-modal nanoscience tools we can now routinely go places no one thought would be possible as recently as five years ago."

The work was inspired by "multi-messenger" astrophysics, which emerged during the last decade as a revolutionary technique for the study of distant phenomena like black hole mergers. Simultaneous measurements from instruments, including infrared, optical, X-ray and gravitational-wave telescopes can, taken together, deliver a physical picture greater than the sum of their individual parts.

The search is on for new materials that can supplement the current reliance on electronic semiconductors. Control over material properties using light can offer improved functionality, speed, flexibility and energy efficiency for next-generation computing platforms.

Experimental papers on quantum materials have typically reported results obtained by using only one type of spectroscopy. The researchers have shown the power of using a combination of measurement techniques to simultaneously examine electrical and optical properties.

The researchers performed their experiment by focusing laser light onto the sharp tip of a needle probe coated with magnetic material. When thin films of metal oxide are subject to a unique strain, ultra-fast light pulses can trigger the material to switch into an unexplored phase of nanometer-scale domains, and the change is reversible.

By scanning the probe over the surface of their thin film sample, the researchers were able to trigger the change locally and simultaneously manipulate and record the electrical, magnetic and optical properties of these light-triggered domains with nanometer-scale precision.

The study reveals how unanticipated properties can emerge in long-studied quantum materials at ultra-small scales when scientists tune them by strain.

"It is relatively common to study these nano-phase materials with scanning probes. But this is the first time an optical nano-probe has been combined with simultaneous magnetic nano-imaging, and all at the very low temperatures where quantum materials show their merits," McLeod said. "Now, investigation of quantum materials by multi-modal nanoscience offers a means to close the loop on programs to engineer them."