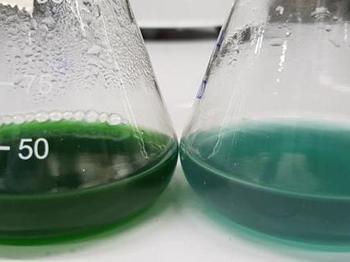 Researchers have copied the way organisms produce toxic chemicals without harming themselves, paving the way for greener chemical and fuel production.

The new technique, pioneered by Imperial College London scientists, could reduce the need to use fossil fuels to create chemicals, plastics, fibres and fuels.

Currently, many useful chemicals are produced from fossil fuels, which require mining, are of limited supply, and disrupt the carbon cycle. An alternative is to engineer microorganisms like Escherichia coli (E. coli) and cyanobacteria to more sustainably produce the chemicals directly from atmospheric carbon dioxide.

However, many of the chemicals that can be produced this way are toxic to the microorganisms, reducing their ability to make large quantities in a cost-effective way.

Now, by copying the way natural organisms deal with their own toxic chemicals, researchers have shown that bacteria can be programmed to produce chemicals without also harming growth.

This concept could be used to produce useful chemicals, plastics and even fuels, which could further reduce the need for fossil fuels and help minimise climate change. The new technique and a first proof of concept are published in Proceedings of the National Academy of Sciences.

Lead researcher Dr Patrik Jones, from the Department of Life Sciences at Imperial, said: "We looked at what nature does already, for its own benefit, and applied the idea to biotechnology, for our benefit."

Organisms like plants and yeasts sometimes produce chemicals that are toxic to them, so to store them safely, they make small modifications to the chemicals to render them harmless. The resulting chemicals are known as 'derivatives', and can be returned to the original, toxic form through relatively simple chemistry.

The team took this idea and used genetic engineering to program E. coli and cyanobacteria to make 1-octanol, a chemical currently used in perfumes, which is toxic to the bacteria. They then added an extra set of instructions to E. coli so it would produce two different derivatives of 1-octanol that are both less harmful.

The researchers say if this were to be scaled up for industrial systems the engineered bacteria would produce the non-toxic derivative of 1-octanol, which would then be recovered and chemically transformed back into 1-octanol, ready for use.

The team found that their system produced 1-octanol without affecting the growth of the bacteria. They also found the system produced more 1-octanol than a system without the derivatization step, which they think is related to the fact that the derivative is not only less toxic but also more soluble in the surrounding water or solvent.

Dr Jones said: "A more soluble chemical may move away from the cells quicker, where it's less likely to interfere with any of the bacteria's processes."

Now the team has shown the concept of creating derivatives using programmed microorganisms, they want to set up a complete system, from production of the derivative to recovery of the desired chemical.

This will help them refine the process, and potentially scale it up for use in industrial settings.