An 18-carat gold nugget made of plastic 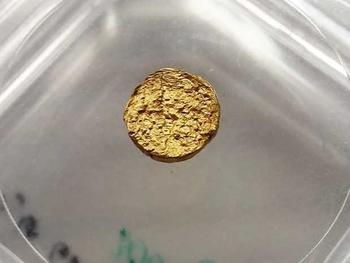 Looks amazingly similar to a real nugget: 18-​carat gold with latex as the base material.

ETH researchers have created an incredibly lightweight 18-​carat gold, using a matrix of plastic in place of metallic alloy elements.

Lovers of gold watches and heavy jewellery will be thrilled. The objects of their desire may someday become much lighter, but without losing any of their glitter. Especially with watches, a small amount of weight can make all the difference. No one wants to wear a heavy watch on their wrist, even if it’s made of real gold. After a time, it becomes uncomfortable and annoying.

Formerly a postdoc in the ETH lab headed by Raffaele Mezzenga, Professor of Food and Soft Materials, Leonie van ’t Hag set to create a new form of gold that weighs about five to ten times less than traditional 18-​carat gold. The conventional mixture is usually three-​quarters gold and one-​quarter copper, with a density of about 15 g/cm3.

That’s not true for this new lightweight gold: its density is just 1.7 g/cm3. And nonetheless it is still 18-​carat gold. How was this miraculous lightness achieved? Instead of a metal alloy element, van ’t Hag, Mezzenga and colleagues used protein fibres and a polymer latex to form a matrix in which they embedded thin discs of gold nanocrystals. In addition, the lightweight gold contains countless tiny air pockets invisible to the eye.

Here’s how the researchers create the new lightweight gold: first, they add the ingredients to water and create a dispersion. After adding salt to turn the dispersion into a gel, next they replace the water in it with alcohol.

Then they place the alcohol gel into a pressure chamber, where high pressures and a supercritical CO2 atmosphere enables miscibility of the alcohol and the CO2 gas; when the pressure is released, everything turns it into a homogeneous gossamer-​like aerogel. Heat can be further applied afterwards to anneal the plastic polymers, thus transforming the material and compacting into the final desired shape, yet preserving the 18 carat composition.

Properties of a plastic workpiece

“This gold has the material properties of a plastic,” Mezzenga says. If a piece of it falls onto a hard surface, it sounds like plastic. But it glimmers like metallic gold, and can be polished and worked into the desired form.

The researchers can even adjust the hardness of the material by changing the composition of the gold. They can also replace the latex in the matrix with other plastics, such as polypropylene. Since polypropylene liquifies at some specific temperature, “plastic gold” made with it can mimic the gold melting process, yet at much lower temperatures. Furthermore, the shape of the gold nanoparticle can change the material’s colour: “nanoplatelets” produce gold’s typical shimmer, while spherical nanoparticles of gold lend the material a violet hue.

“As a general rule, our approach lets us create almost any kind of gold we choose, in line with the desired properties,” Mezzenga says.

Gold for watchmaking and electronics

Mezzenga points out that, while the plastic gold will be in particular demand in the manufacture of watches and jewellery, it is also suitable for chemical catalysis, electronics applications or radiation shielding. The researchers have applied for patents for both the process and the material.

Mezzenga’s scientists had already made a name for themselves some time ago with the lightest gold in world – gold that weighed so little it could float atop cappuccino froth. “But the material was too unstable and couldn’t be worked. This time we set ourselves the clear goal of creating a lightweight gold that can also actually be processed and used in most of the applications where gold is used today” Mezzenga says.