The origins of roughness 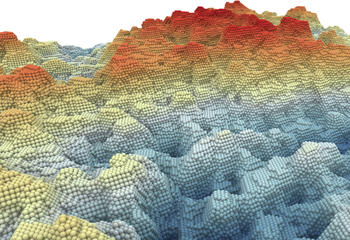 Most natural and artificial surfaces are rough: metals and even glasses that appear smooth to the naked eye can look like jagged mountain ranges under the microscope. There is currently no uniform theory about the origin of this roughness despite it being observed on all scales, from the atomic to the tectonic. Scientists suspect that the rough surface is formed by irreversible plastic deformation that occurs in many processes of mechanical machining of components such as milling. Prof. Dr. Lars Pastewka from the Simulation group at the Department of Microsystems Engineering at the University of Freiburg and his team have simulated such mechanical loads in computer simulations. The researchers found out that surfaces made of different materials, which show distinct mechanisms of plastic deformation, always develop surface roughness with identical statistical properties.

Geological surfaces, such as mountain ranges, are created by mechanical deformation, which then leads to processes such as fracture or wear. Synthetic surfaces typically go through many steps of shaping and finishing, such as polishing, lapping, and grinding, explains Pastewka. Most of these surface changes, whether natural or synthetic, lead to plastic deformations on the smallest atomic length scale: “Even at the crack tips of most brittle materials such as glass, there is a finite process zone in which the material is plastically deformed,” says the Freiburg researcher. “Roughness on these smallest scales is important because it controls the area of intimate atomic contact when two surfaces are pressed together and thus adhesion, conductivity and other functional properties of surfaces in contact.”

In collaboration with colleagues from the Karlsruhe Institute of Technology, the École Polytechnique Fédérale de Lausanne/Switzerland, and the Sandia National Laboratories/USA, and funded by the European Research Council (ERC), Pastewka and his group were able to simulate the surface topography for three reference material systems at the JUQUEEN and JUWELS supercomputers at the Jülich Supercomputing Centre, which included monocrystalline gold, a high entropy alloy of nickel, iron and titanium, and the metallic glass copper-zirconium, in which the atoms do not form ordered structures but an irregular pattern. Each of these three materials is known to have different micromechanical or molecular properties. The scientists now investigated the mechanism of the deformation and the resulting changes in the atomic scale both within the solid and on its surface.

Pastewka, who is also a member of the Cluster of Excellence Living, Adaptive and Energy-autonomous Material Systems (livMatS), and his team found that despite their different structures and material properties, all three systems, when compressed, develop rough surfaces with a so-called self-affined topography. This means that the systems have identical geometric structures regardless of the scale on which they are observed: Surface topography in a virtual microscope at the nanometer scale cannot be distinguished from the structure of mountain landscapes at the kilometer scale. “This is one explanation,” says Pastewka, “as to why an almost universal structure of surface roughness is observed in experiments.”