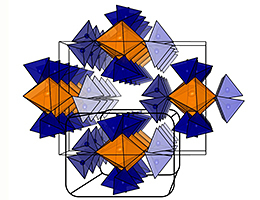 In the battery of the future, solids will replace the currently used electrolyte solutions. A team of scientists at LMU has now developed a series of new sodium ion conductors. The secret of the best material in the series lies in the exact mixing of the ingredients.

The days of conventional lithium-ion batteries are numbered, as solid state batteries have become an excellent alternative on the market. Their great advantage is the replacement of the liquid lithium-containing electrolyte by a solid electrolyte. It reduces the risk of fire, eliminates the need for an external system to control the temperature and enables fast charging and discharging. In order to be able to produce more batteries without the critical resource lithium in the future, new systems with sodium as a substitute are desired. The decisive factor for their success is conductivity, which should be as high as possible.

The elements sodium, aluminum, silicon, and sulfur play an important role in the development of solid electrolytes. All four substances are available in abundance on earth and are low in cost. And in the right mixing ratio they can significantly increase the conductivity of a solid electrolyte. In a recent publication, scientists in the group of Prof. Bettina Lotsch from the Max Planck Institute for Solid State Research, Stuttgart, and the Department of Chemistry at LMU have described three new compounds and determined their electrical properties. In doing so, they discovered that by mixing the elements aluminum and silicon with sodium and sulfur in the correct ratio, a completely new structure (Na9AlS4SiS4) is created. Compared to compounds without mixture (Na5AlS4 and Na4SiS4), this is particularly advantageous for ion transport.

The sodium ions have many different and irregularly shaped environments in the network formed by the atoms of the other three elements and can therefore move particularly easily through the electrolyte: They move through a flat energy landscape. Theoretical calculations using the so-called Bond Valence Energy Landscapes (BVEL) method support this hypothesis. By adding a pinch more silicon, the scientists were able to optimize the amount of moving sodium ions. This led to the fastest conducting material of all compounds: Na8.5(AlS4)0.5(SiS4)1.5.

These results highlight the importance of understanding structures with flat energy landscapes for the development of solid electrolytes for the next generation of batteries.