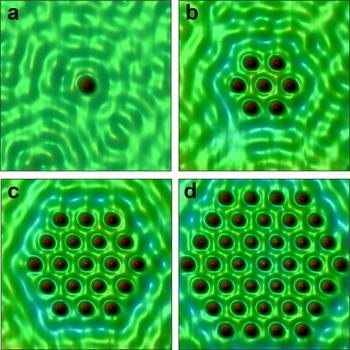 Cobalt atoms (red) are placed on a copper surface (green) one at a time to form a Kondo droplet, leading to a collective pattern that is the fundamental building block of superconductivity.

Scientists have been interested in superconductors - materials that transmit electricity without losing energy - for a long time because of their potential for advancing sustainable energy production. However, major advances have been limited because most materials that conduct electricity have to be very cold, anywhere from -425 to -171 degrees Fahrenheit, before they become superconductors.

A new study by University of Illinois at Chicago researchers published in the journal Nature Communications shows that it is possible to manipulate individual atoms so that they begin working in a collective pattern that has the potential to become superconducting at higher temperatures.

"This successful proof of concept opens unprecedented opportunities to engineer new smart materials, and ultimately, a room-temperature superconductor," said Dirk Morr, corresponding author and UIC professor of physics in the College of Liberal Arts and Sciences.

Morr and his colleagues, including Stanford University's Hari Manoharan, used a technique known as atomic manipulation, to place single cobalt atoms on a metallic copper surface in a perfectly ordered hexagonal pattern, called a Kondo droplet.

"We had theoretically predicted that for certain distances between the cobalt atoms, this nanoscopic system should start to exhibit collective behavior, while for other distances, it should not," Morr said.

The predictions were confirmed by experiments that showed that collective behavior appears in Kondo droplets containing as little as 37 cobalt atoms.

"This is an important step forward, as the creation of collective behavior is the fundamental building block from which superconductivity emerges. It allows us to move one step closer to developing the theory that describes the process of how materials could become superconducting at room temperature," Morr said. "This work is an example of thinking outside of the box and using principles from other research fields to promote innovation. We hope this discovery will lead to new superconductors and improve sustainable energy systems."