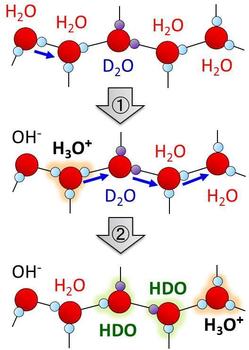 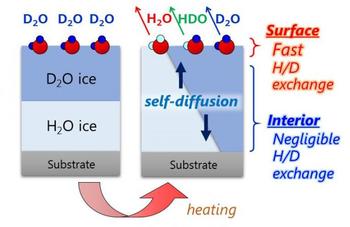 Simultaneous observation of the H/D isotopic exchange of water molecules at the surface and in the interior of well-defined double-layer ice films composed of H2O and D2O. 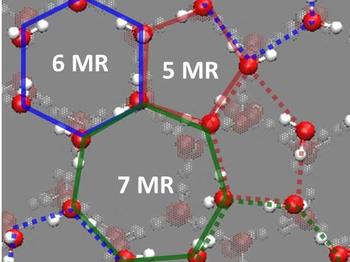 Water ice is one of the most abundant solid substances in nature and hydrated protons on the ice surfaces critically influence physical and chemical properties of ices. Hydrated protons are easily doped into the hydrogen-bond (HB) networks when acidic impurities are present. In contrast, in pure water molecular systems, they are generated solely by the thermal ionization of water molecules (H2O⇆H+hyd + OH-hyd). Therefore, the proton activity inherent to water ice is determined by the amount and mobility of hydrated protons derived from the autoionization.

Considerable discussions have been made, yet not been settled, on whether the activity of hydrated protons is substantially enhanced at the surface of water ice. This is crucially important problem for understanding the impact of ice surface ubiquitous in nature on a wide variety of heterogeneous phenomena, such as charge generation, separation and trapping in a thunder storm, photochemical destruction of the earth's ozone layer, and even the molecular evolution in space, etc.

Very recently, researchers led by Toshiki Sugimoto, Associate Professor at the Institute for Molecular Science, succeeded in directly and quantitatively demonstrating that the proton activity is significantly enhanced at the surfaces of low-temperature ice. On the basis of simultaneous experimental observation of the H/D isotopic exchange of water molecules at the surface and in the interior of double-layer crystalline-ice films composed of H2O and D2O, they reported three major discoveries of the unique enhancement of surface proton activity: (1) proton activity proved by the H/D exchange at the topmost surface is at least three orders of magnitude higher than in the interior even below 160 K; (2) the enhanced proton activity is dominated by autoionization process of water molecules rather than proton transfer process at ice surface; (3) as a consequence of surface promoted autoionization, the concentration of surface hydrated protons is estimated to be more than six orders of magnitude higher than that in the bulk.

Correlating these results with molecular-level structure and dynamics of the low-temperature ice surface, they discussed that the cooperative structural fluctuations allowed in the undercoordinated surface molecules but inhibited in the fully coordinated interior molecules facilitate the autoionization and dominate the proton activity at the ice surface. Because the lower limit of temperature of the earth's atmosphere is ~120 K around the mesopause, the surface of crystalline ice on earth is unlikely to be solidly ordered but would inevitably be highly fluctuated. In nature, such dynamic features facilitate the autoionization of water molecules and thus enhance the proton activity at the surface of crystalline ice. "Our results not only advance the physical chemistry of interfacial hydrogen bonds but also provide a firm basis for elucidating the key properties of ice surface that are of great interest in a variety of phenomena relevant to the dynamics of hydrated protons," says Sugimoto.