Titanium catalyst enables reactions with the help of green light 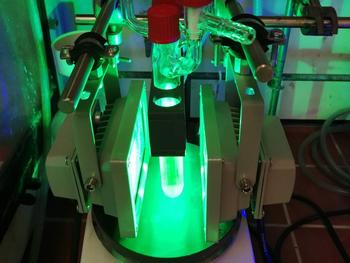 Flasks containing the titanium catalyst and the red dye, which are irradiated with green light in the laboratory of the Kekulé Institute of Organic Chemistry and Biochemistry.

For the first time, chemists at the University of Bonn and Lehigh University in Bethlehem (USA) have developed a titanium catalyst that makes light usable for selective chemical reactions. It provides a cost-effective and non-toxic alternative to the ruthenium and iridium catalysts used so far, which are based on very expensive and toxic metals. The new catalyst can be used to produce highly selective chemical products that can provide the basis for antiviral drugs or luminescent dyes, for example.

The electrons in chemical molecules are reluctant to lead a single life; they usually occur in pairs. Then they are particularly stable and do not tend to forge new partnerships in the form of new bonds. However, if some of the electrons are brought to a higher energy level with the help of light (photons), things begin to look different when it comes to this "monogamy": In such an excited state, the molecules like to donate or to accept an electron. This creates so-called "radicals", that have electrons, are highly reactive and can be used to form new bonds.

The new catalyst is based on this principle: At its core is titanium, which is connected to a carbon ring in which the electrons are particularly mobile and can be easily excited. Green light is sufficient to use the catalyst for electron transfer to produce reactive organic intermediates that are otherwise not easily obtainable. "In the laboratory, we irradiated a reaction flask containing the titanium catalyst that can be viewed as a ‘red dye’ with green light," reports Prof. Dr. Andreas Gansäuer from the Kekulé Institute of Organic Chemistry and Biochemistry at the University of Bonn. "And it worked right away." The mixture generates radicals from organic molecules that initiate many reaction cycles from which a wide variety of chemical products can be produced.

A key factor in reactions with this photo redox catalyst is the wavelength of the light used for irradiation. "Ultraviolet radiation is unsuitable because it is far too energy-rich and would destroy the organic compounds," says Gansäuer. Green light from LED lamps is both mild and energy-rich enough to trigger the reaction.

Catalysts are substances that increase the speed of chemical reactions and reduce the activation energy without being consumed themselves. This means that they are available continuously and can trigger reactions that would otherwise not occur in this form. The catalyst can be tailored to the desired products depending on the organic molecule with which the titanium is bonded.

The new titanium catalyst facilitates the reactions of epoxides, a group of chemicals from which epoxy resin are made. These are used as an adhesive or for composites. However, the scientists are not aiming for this mass product, but for the synthesis of much more valuable fine chemicals. "The titanium-based, tailor-made photo redox catalysts can for instance be used to produce building blocks for antiviral drugs or luminescent dyes," says Gansäuer. He is confident that these new catalysts provide a cost-effective and more sustainable alternative to the ruthenium and iridium catalysts used so far, which are based on very expensive and toxic metals.

The development is an international collaborative effort by Zhenhua Zhang, Tobias Hilche, Daniel Slak, Niels Rietdijk and Andreas Gansäuer from the University of Bonn and Ugochinyere N. Oloyede and Robert A. Flowers II from Lehigh University (USA). While the scientists from the University of Bonn investigated how the desired compounds could best be synthesized with the new catalyst, their colleagues from the USA carried out measurements to prove the reaction pathways. "The luminescence phenomenon really opens up interesting space to consider the design of new sustainable reactions that proceed through free radical intermediates," says Prof. Robert Flowers from the Lehigh University.