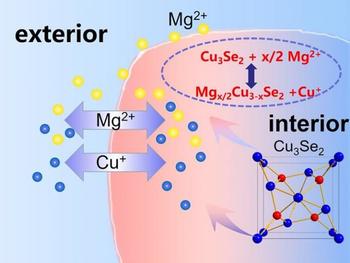 Researchers at the Qingdao Institute of Bioenergy and Bioprocess Technology (QIBEBT) of the Chinese Academy of Sciences (CAS) have come a step closer to making a viable, high-output battery based on magnesium (Mg), an element the United States Geological Survey reports is far more abundant than lithium.

Recent attempts to develop a viable Mg battery have stumbled, because the discharge products are insulators, hampering output and slowing down the charge cycle.

The QIBEBT researchers found that using a copper ion ("Cu+") origin from the cathode in the battery addresses the issue of discharge product build-up. As their Mg battery discharges, Cu+ dissolves into electrolyte, exchange with the Mg2+ chemically, and becomes metallic copper as it receives electrons and forms a coating on the electrode. Since copper is highly conductive, electricity flows freely, allowing for high energy output.

Prof. CUI Guanglei said his team's Mg battery is not yet commercially viable, but it is on track to compete with lithium battery. "We expect to achieve the 1,000-cycle milestone in the next two years," he said.

The day-to-day price of magnesium averages about $5,000 USD per ton - about half the cost of lithium. Beyond being cheaper, magnesium-based batteries would also be safer. Poorly made lithium batteries can overheat and explode, creating a liability for industries ranging from telecom to aerospace. "I have every confidence to say that the employment Cu+/Mg can lead to safer battery products," Prof. CUI said.

Prof. CUI said the next step toward making Cu+/Mg batteries a commercial reality will be to design it as a flexible pouch. To do so, they'll need to create a gel form of their Cu+ electrolyte solution.

"As we can see, a gel electrolyte would be suitable for the Cu+ driven cathode chemistry," Prof. CUI said. Once the battery can function in a gel pouch form, it will become easier to engineer it into the odd and often very thin shapes demanded by today's consumer devices.

"The ultimate goal of this study is to commercialize the Mg metal battery as the next generation energy storage devices beyond lithium-ion technology." Prof. CUI said.