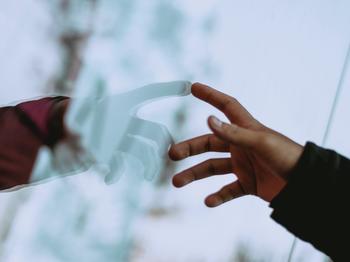 Chirality is a fundamental property of many organic molecules and means that chemical compounds can appear in not only one form, but in two mirror-image forms as well (symbolic image).

Chirality is a fundamental property of many organic molecules and means that chemical compounds can appear in not only one form, but in two mirror-image forms as well. Chemists at Martin Luther University Halle-Wittenberg have now found a way to spontaneously induce chirality in crystalline, liquid-crystalline and liquid substances, without requiring any external influence. The findings could be significant for the development of new active substances and for materials science.

Chirality is found in almost all molecules occurring in nature. "Molecules are spatial arrangements of interconnected atoms. Many molecules, however, have not only one form, but at least two," explains Professor Carsten Tschierske, a chemist at MLU. When these forms are mirror images of each other it is called chirality.

Both mirror-image forms are produced in equal numbers during normal chemical reactions in the laboratory. "However, things occur differently in nature: carbohydrates, amino acids and nucleic acids only have one dominant form," explains Tschierske. And with good reason: for example, nucleic acids carry information about our DNA. Even the slightest changes to our genetic material can lead to serious diseases. "If each nucleic acid had two forms, the structure of our DNA would be chaotic because there would be too many possible variations. Life as we know it would be impossible," states Tschierske.

The exact process that once created the uniform chirality in these molecules is still unknown. Furthermore, it was long assumed that mixtures of mirror-image molecules can only separate spontaneously in crystalline materials. However, in a study published in "Nature Chemistry" in 2014, Tschierske’s team was able to show that this phenomenon of chiral cleavage can also be observed in liquids. "This is significant because the origins of life are found in liquid aqueous systems," explains the chemist.

In this new study, his team went one step further. The researchers found a way to not only generate chirality in liquids, but also to specifically transfer it to liquid-crystalline and crystalline materials without incurring any losses. To do this, the scientists used benzil, a molecule that is normally achiral, in other words, has no mirror image, but can be twisted in such a way to make it chiral. "We already knew that benzil could crystallize in a uniform chiral shape," says Tschierske. By modifying this molecule, the researchers were able to spontaneously generate molecules with uniform chirality even in a liquid state - and to maintain this state during conversions. "These findings contribute to our understanding of the formation of uniform biochirality. At the same time, our approach can also be used to synthesize chiral molecules and materials - without requiring expensive chiral precursors," explains Tschierske.

The study conducted in Halle contributes to our understanding of how uniform biochirality might have developed millions of years ago. At the same time, it provides new insights into how chirality can be spontaneously generated. There is a broad range of applications: for example, chiral substances can be used as active ingredients in medicine. The research findings could also be used in a wide variety of materials, for example in optical information processing.