Insights into the structure of an enigmatic catalyst 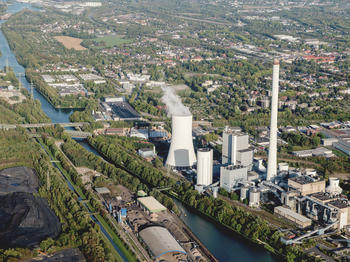 In the past, the catalyst for the production of methanol had eluded all attempts to clarify its surface structure. Now researchers have learned more about its active site.

Methanol is one of the most important basic chemicals used, for example, to produce plastics or building materials. To render the production process even more efficient, it would be helpful to know more about the copper/zinc oxide/aluminium oxide catalyst deployed in methanol production. To date, however, it hasn’t been possible to analyse the structure of its surface under reaction conditions. A team from Ruhr-Universität Bochum (RUB) and the Max Planck Institute for Chemical Energy Conversion (MPI CEC) has now succeeded in gaining insights into the structure of its active site.

In a first, the team showed that the zinc component of the active site is positively charged and that the catalyst has as many as two copper-based active sites. “The state of the zinc component at the active site has been the subject of controversial discussion since the catalyst was introduced in the 1960s. Based on our findings, we can now derive numerous ideas on how to optimise the catalyst in the future,” outlines Professor Martin Muhler, Head of the Department of Industrial Chemistry at RUB and Max Planck Fellow at MPI CEC. For the project, he collaborated with Bochum-based researcher Dr. Daniel Laudenschleger and Mülheim-based researcher Dr. Holger Ruland.

The study was embedded in the Carbon-2-Chem project, the aim of which is to reduce CO2 emissions by utilising metallurgical gases produced during steel production for the manufacture of chemicals. In combination with electrolytically produced hydrogen, metallurgical gases could also serve as a starting material for sustainable methanol synthesis. As part of the Carbon-2-Chem project, the research team recently examined how impurities in metallurgical gases, such as are produced in coking plants or blast furnaces, affect the catalyst. This research ultimately paved the way for insights into the structure of the active site.

The researchers had identified nitrogen-containing molecules– ammonia and amines – as impurities that act as catalyst poisons. They deactivated the catalyst, but not permanently: if the impurities disappear, the catalyst recovers by itself. Using a unique research apparatus that was developed in-house, i.e. a continuously operated flow apparatus with an integrated high-pressure pulse unit, the researchers passed ammonia and amines over the catalyst surface, temporarily deactivating the active site with a zinc component. Despite the zinc component being deactivated, another reaction still took place on the catalyst: namely the conversion of ethene to ethane. The researchers thus detected a second active site operating in parallel, which contains metallic copper but doesn’t have a zinc component.

Since ammonia and the amines are bound to positively charged metal ions on the surface, it was evident that zinc, as part of the active site, carries a positive charge.