Your tool for Syntheses, Patents and Applications
13-Aug-2020 - Universität Regensburg

Behind the veil of nothingness 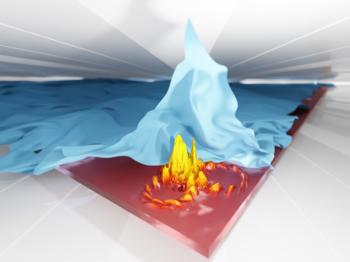 Artistic depiction of the electron wave function (red and yellow colours) dressed by a sheet of virtual photons (blue).

An international research team from Germany and France has created structures in which light fields interact with electrons so strongly that the quantum vacuum itself is significantly altered. Using extremely short bursts of light, they interrupted this coupling much faster than the timescale of a vacuum fluctuation and observed an intriguing ringing of the emitted electromagnetic field, indicating the collapse of the vacuum state. Their key achievement could improve our understanding of the nature of nothingness – the vacuum of space itself, paving a way towards photonics exploiting vacuum fluctuations.

One of the key insights of quantum mechanics is that absolute nothingness, a concept already discussed by Greek philosophers, is nowhere to be found in reality. Quite to the contrary, quantum field theory has shown that seemingly empty space is filled by fluctuations of light and matter fields, leading to a continuous popping into existence and disappearance of photons as well as massive particles. In the founding days of quantum mechanics, these consequences of Heisenberg’s uncertainty principle were often not taken too seriously. However, modern physics is more and more discovering how our universe is shaped by fluctuations of physical fields, which not only lead to tiny shifts of spectral lines of atoms, but moreover may cause the evaporation of black holes, and are ultimately responsible for the large-scale structure of our universe, formed during the inflationary period following the big bang. Yet, controlling these fluctuations on a laboratory scale with the relevant temporal precision has remained extremely challenging to this date.

Researchers around Prof. Dr. Christoph Lange, Prof. Dr. Dominique Bougeard, and Prof. Dr. Rupert Huber (Department of Physics, University of Regensburg) as well as Prof. Dr. Cristiano Ciuti (Université de Paris) have now made a large leap towards controlling strongly enhanced vacuum fluctuations much faster than typical timescales of virtual photons. To this end, they created a specialized semiconductor structure in which electrons are extremely strongly coupled to the light fields of tiny antennas designed for the so-called terahertz spectral range. As a result, vacuum fluctuations of light and matter fields participate in the interaction, strongly increasing the presence of virtual photons – even in complete darkness. “The key step forward was then to implement functionality to switch off this coupling extremely rapidly”, PhD student Maike Halbhuber explains. “We were pleased as the first data showed that the switch-off worked perfectly. But we were thrilled when advanced experiments showed an intriguing, unexpected oscillation of the light field during switching”, PhD student Joshua Mornhinweg adds. Analyzing this ringing of the collapsing quantum vacuum by a custom-cut theory, the researchers showed that the switching occurs within just a tenth of a trillionth of a second – more than ten times faster than an oscillation cycle of a virtual photon.

The key achievements of custom quantum vacuum states with record populations of virtual photons, and subcycle control of feeble zero-point fluctuations offer an unprecedented level of flexibility for future investigations. As an immediate next step, the team will search for direct evidence of virtual photons emerging during switching of designed quantum vacua. Yet, the scope of this research idea is very likely to expand much further. “Implementing subcycle control of vacuum fields for existing concepts such as cavity quantum chemistry, cavity-controlled transport, or vacuum-modified superconductivity may unravel qualitatively new information on the interplay of vacuum fields and matter”, Prof. Lange envisions. Future experiments may not only address the nature of vacuum fluctuations, but moreover offer the possibility to control chemical reactions or superconducting currents, merely by switching the vacuum field on the shortest relevant time scales.