Until now, unwanted by-products have always been produced during the reactions - The catalyst opens up new applications 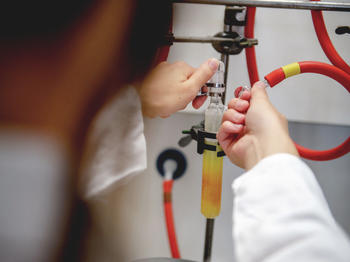 The Bochum research team has developed a new catalyst that could be interesting for industrial applications.

Researchers at Ruhr-Universität Bochum have developed a new catalyst that can catalyse reactions to produce pharmaceuticals or chemicals used in agriculture. It creates carbon-carbon bonds between what are known as organolithium compounds without creating any unwanted by-products. The team led by Professor Viktoria Däschlein-Gessner, Inorganic Chemistry II Research Group, describes the results in the journal Angewandte Chemie, published online on 29 July 2020.

Indispensable for many applications

Organolithium compounds are reagents with a lithium-carbon bond, which are among the most reactive compounds in synthetic chemistry. “Due to their special properties, they are indispensable in many applications, even on an industrial scale,” says Viktoria Däschlein-Gessner, member of the Cluster of Excellence Ruhr Explores Solvation, Resolv for short. “However, high reactivity often also leads to unwanted side reactions. As a result, organolithium compounds have so far only been considered to a limited extent, or even not at all, for some applications.”

The research group led by Viktoria Däschlein-Gessner was able to overcome such limitations with the help of a highly efficient catalyst. The new phosphine-palladium catalyst selectively couples two carbon atoms – both with different organolithium compounds and many so-called aryl halides. The decisive factor was that it is sufficiently active, even at room temperature.

No additional additives are needed for the new synthesis process and it can be used widely. This means that intermediate steps during synthesis can be avoided, thus producing less metal salt waste. The catalyst guarantees a high degree of selectivity, even if product quantities of several grams are produced. To allow for use on an industrial scale, the next step must be to test it at even larger volumes.

In cooperation with industry, the researchers in Bochum intend to launch the developed catalysts on the market soon. “Their particular activity is not only advantageous in the described reactions, but also offers improvements for numerous other transformations in almost all areas of fine chemical synthesis,” says Däschlein-Gessner. In addition to the production of pharmaceuticals and chemicals for agriculture, these include fragrances and materials for organic light-emitting diodes.