When human and machine agree 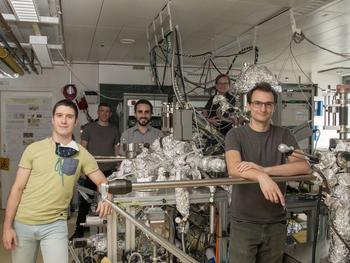 Iridium oxide is an excellent catalyst for electrochemical reactions, and is typically used for the production of energy carriers such as hydrogen from water. Now it turns out that research on iridium oxide carried out so far has been based on a wrong basic assumption: The arrangement of the atoms on its surface is completely different to that previously assumed.

The way in which this surprising result was determined gives a tantalizing first glimpse of how research might be performed in the future: a collaborative effort between a human research team and artificial intelligence analyzed the same problem, and came to the same conclusion. Since the researchers at the TU Wien and the TU Munich reached the same result at the same time, they published their findings jointly in the journal "Physical Review Letters".

How to cut a crystal?

“A crystal can have different surfaces with very different properties,” explained Florian Kraushofer from Prof. Ulrike Diebold's research group (Institute for Applied Physics, Vienna University of Technology). "Let's imagine that we have a crystal made up of cube-shaped cells. If we cut through it, quite different surfaces arise depending on the direction we cut."

If you cut exactly in the direction of the cube cells, the surface consists just of squares. If you cut the cube cells diagonally, this also creates a regular surface, but with a different arrangement.

"When a crystal grows slowly, it normally forms the surface that is most favorable in terms of energy," says Kraushofer.  Not all possible atomic arrangements are stable though, and in some cases the atoms shift or rearrange on the surface to save energy. “Typically, one needs to perform very complex simulations using a supercomputer to determine which geometric configuration is the most stable,” explains Kraushofer. “In the case of iridium oxide, such calculations had shown that the most stable surface was formed in the so-called 110 direction, but our experiments showed something was amiss, and that another surface was more stable."

At a conference just before the corona lockdown, Ulrike Diebold met Karsten Reuter from the Technical University of Munich, who is also working on iridium oxide. His team uses machine learning - i.e. techniques from the field of artificial intelligence - to better calculate material properties. They had exactly the same surprise as in Vienna: “Just like the experiment, the machine learning algorithms had predicted the stable direction of the iridium oxide surface to be different from what was previously thought,” says Reuter. “So we decided to take a closer look at the matter together.”

Further investigations were then carried out, including more extensive computer simulations, and it was shown that the new structure determined by the experiment and the machine learning algorithms is actually right.

Human and machine: a look into the future

“So now we have to rethink all previous results on iridium dioxide,” says Ulrike Diebold. "The orientation of the surface plays a decisive role in the chemical and physical behavior of the material, and this needs to be included."

For Diebold, the result is also important proof that new research methods in the field of machine learning can be extremely valuable for science: “Especially when it comes to developing new materials based on quantum physics, computer simulations have been indispensable for years - but they are often extremely complex, expensive and time-consuming”, says Ulrike Diebold. “If machine learning can be applied intelligently for such complicated questions, it can become a great new tool that will take materials research a big step forward. Of course, to make this possible, we also need the best possible experimental measurements. "

"This will not replace human intelligence - just as it has not been able to replace us with computer simulations up to now," Diebold is convinced. "But machine learning algorithms will help us come up with good ideas that we would not necessarily have thought of ourselves."