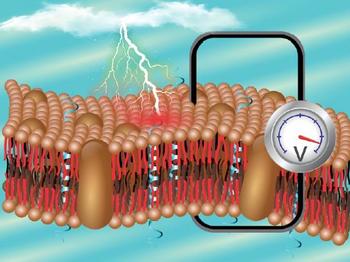 Converting heat into electricity is a property thought to be reserved only for stiff materials like crystals. However, researchers--inspired by the infrared (IR) vision of snakes--developed a mathematical model for converting soft, organic structures into so-called "pyroelectric" materials. The study, appearing October 21 in the journal Matter, proves that soft and flexible matter can be transformed into a pyroelectric material and potentially solves a long-held mystery surrounding the mechanism of IR vision in snakes.

When a material can convert heat into an electric impulse it is called "pyroelectric," a property typically only found in hard, inflexible substances. The mystery is how IR sensing snakes can achieve this heat-to-electricity conversion despite having naturally soft anatomy.

"People thought we could explain the IR sensing of snakes if there was a hard, pyroelectric material in their pit organ, but nobody ever found one," says Pradeep Sharma, the M.D. Anderson Professor and Chair of Mechanical Engineering at the University of Houston. "So, we wondered whether just as we are trying to make these soft materials pyroelectric, maybe nature is doing the same thing."

Pit vipers and other snakes, like the aliens in the Predator series, are well-known for their heat sensing. In fact, the IR vision of pit vipers is so acutely sensitive that "if an animal appears in pitch black darkness, even for a half a second 40 centimeters away, the pit viper will be able to detect it," Sharma says.

This ability is achieved by a structure called a pit organ--a hollow chamber close to the snake's nostrils containing a thin, flexible membrane. "The pit organ plays an important role in processing heat into a signal they can detect," says Sharma. "However, the missing part of the equation was how the neuron cells within the pit organ membrane convert a heat signature into electricity to create that signal."

Using the physiology of the pit organ membrane as inspiration, Sharma and his team were able to construct a mathematical model to explain how this conversion from heat to electricity could be possible in a soft organic material. "Our solution is deceptively simple," says Sharma. "Apart from more advanced design elements, to make a pyroelectric soft material all you need is to embed static, stable charges into the material and ensure they don't leak out. Then you must make sure the material is soft enough that its capable of large deformation in shape and size and has a sensitivity to temperature. If you do that, they will act pyroelectric, and that's what we've been able prove in our model. And we believe that's what exactly nature is using because this process is simple and robust."

Lab experiments using soft materials have already begun to authenticate the model, though further research is needed to confirm whether this proposed mechanism is taking place in the neuron cells of the snake's pit organ membrane. Earlier work had implicated TRPA1 protein channels located within the membrane's neuron cells as playing an important role; however, the relation of those channels to the proposed mechanism in the paper is yet unknown.

"Using this model, I can confidently create an artificial soft material with pyroelectric properties--of that there is no doubt. And we are fairly confident that we have uncovered at least part of the solution of how these snakes are able to see in the dark, says Sharma. "Now that we've developed the model, other scientists can come forward and start doing the experiments to confirm or deny whether our theory about snake IR sensing is correct."

Next, Sharma wishes to continue his research into soft matter, exploring how to manipulate them to generate electricity solely from a magnetic field. With enough research Sharma hopes to inspire the development of pyro, piezo, and magnetoelectric soft materials, expanding the possibilities of how we generate electricity.