Nano coatings with many functions 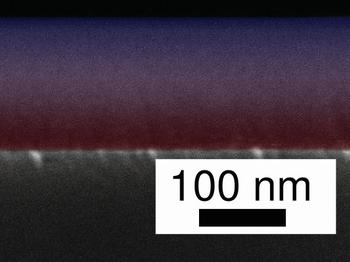 Using an elaborate process, the research team has joined two polymers at the nanoscale in a flowing process: The transition from PV3D3 to Teflon (PTFE) in the scanning electron microscope image of the gradient layer is marked here as the transition from red to blue.

Materials that simultaneously have contrasting properties – for example, they are soft on the one hand and hard on the other, the transition is gradual - could enable completely new applications like gradual anti-reflective lenses. In nature, such merging properties are indeed common, for example in mussels or in the human eye. Materials scientists at Kiel University have been used this principle to develop new materials on the nanoscale. They have now succeeded in producing ultra-thin copolymer thin films with such gradually varying properties. As multifunctional coatings, they could allow complex optical and electronic applications in miniature format, for example for microelectronics.

Mussels can adhere so firmly to stones or jetties that they cannot be detached by the sea current. In order for the soft tissue inside the mussel shell to dock stably to the hard surface of a stone, mussels form elastic adhesive threads, for example, which become continuously harder towards the end. This is due to the mixture of proteins that changes evenly from one end to the other within the fibre.

Based on this principle from nature, materials scientists in Kiel develop unique thin materials with similarly merging properties, so-called gradient thin films. “To achieve this, we combine two materials with different properties at the nano level", explains Stefan Schröder. He is the first author of the study and currently doing his Ph.D. at the Chair for Multicomponent Materials. The study shows a way to synthesize such gradients as ultra-thin polymer films for the first time. Schröder and his colleagues combined polytetrafluoroethylene (PTFE, better known under the trade name "Teflon") with the polymer PV3D3. The resulting material combination could be used, for example, to coat aircraft, refrigerators, or glass fronts to make them easier to de-ice.

For this purpose, Schröder and his colleagues took advantage of the different properties of the two polymers: Teflon is not only known for its non-stick properties, its surface is also hydrophobic. Therefore water droplets ideally roll off immediately or freeze only slightly, which also makes it easier to remove ice. But Teflon itself is difficult to apply to other surfaces. PV3D3 on the other hand is characterised by good adhesive properties. By gradually combining the two materials at the nano level, the research team was able to join them in a smooth transition. On the one hand, the bond is particularly good, and on the other hand, different properties are retained. The result is a coating material with a water-repellent upper side and a well adhering lower side.

Thin polymer coatings – not that easy to produce

But coating surfaces with polymers in a controlled manner is not that easy. There are already established vapour deposition or sputtering processes for coating with metals or ceramic materials, which have also been used on a large industrial scale for decades. However, polymers cannot simply be vaporised or sputtered without decomposition. US scientist Karen K. Gleason provides a remedy with the initiated chemical vapor deposition (iCVD) technique she developed in the mid-1990s at the Massachusetts Institute of Technology MIT, where Schröder spent a research stay in 2017.

"In this process, a gas is fed together with an initiator gas into a reaction chamber in which a substrate surface is located. Heat causes the initiator's chemical bonds to break and a chain reaction to begin," explains doctoral supervisor Professor Franz Faupel, holder of the Chair of Composite Materials and member of the research area KiNSIS (Kiel Nano, Surface and Interface Science) at CAU. This way, a thin polymer film "grows" on the substrate surface from the introduced gases.

The materials scientists from Kiel went one step further. They used the iCVD process not only to create a thin polymer layer but simultaneously also bonded two polymers in a gradual transition. After introducing the V3D3 monomer, they added the starting material for the PTFE deposition and continuously increased its concentration. At the same time, they lowered that of V3D3, so that both form a polymer film on the substrate with a gradual transition from a pure PV3D3 polymer to a pure PTFE film starting from the substrate surface.

During the iCVD technique, numerous processes take place in parallel. "If individual parameters such as the substrate temperature or the pressure of the monomer gas in the reactor are changed, the final material acquires different properties. However, finding the right parameters for the desired properties is very complex," explains Schröder. Therefore, he equipped the conventional iCVD system of their chair with an open ion source quadrupole mass spectrometer. It enables the observation of the processes in the reaction chamber in situ and to adjust the composition of the gas mixture of the initiator and the two monomers at the same time.

Due to this high-precision control, the research team could synthesize a polymer gradient layer that is only 21 nanometres thick. For comparison: human hair has a diameter of about 50,000 nanometres. Previously, only macroscopic gradients had been possible. "Such a thin gradient film is practically a world record and virtually a new class of organic gradient nanomaterials”, says Dr. Thomas Strunskus, a research associate in the working group. "Especially for applications in optics, coatings of only a few nanometres are crucial in order not to impair the optical properties of windows or lenses, for example." The first projects with industrial partners from the coating and air-conditioning technology sector are already in preparation.

Possible applications range from microelectronics and sensors to optics and biomedicine

The process presented in the study can also be used to realize other polymer combinations with new chemical and physical material properties. Nanometer-thin polymer films are also interesting, for example, for flexible microelectronic components and sensors in MEMS technology (micro-electromechanical systems) or molecular machines that transfer mechanical processes to the nanoscale.

The results now published will also flow into the work of several research associations under the umbrella of KiNSIS. "These are fundamental tools for materials science. Applications range from improving the adhesion of functional layers in sensors and developing materials for the controlled release of drugs to molecular machines," says Faupel.