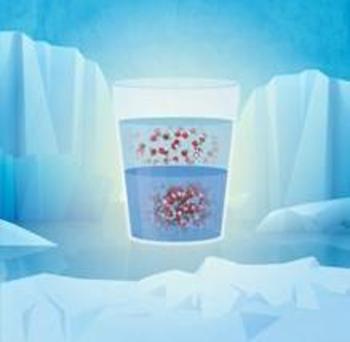 The above graphic offers a conceptual view of how water can exist in two liquid states separated by a thin interface. The bottom liquid is more dense than the one on top, because it is composed of water molecules that are more cosely packed.

Water is a ubiquitous liquid with many highly unique properties. The way it responds to changes in pressure and temperature can be completely different from other liquids that we know, and these properties are essential to many practical applications and particularly to life as we know it. What causes these anomalies has long been a source of scientific inspiration with various theoretical explanations, but now an international team of researchers, which includes Nicolas Giovambattista, a professor at The Graduate Center, CUNY and chair for the Department of Physics at Brooklyn College, has proved that water can exist in two different liquid states -- a finding that can explain many of water's anomalous properties. Their research appears in a paper published in the November 20 issue of the journal Science. "The possibility that water could exist in two different liquid states was proposed approximately 30 years ago, based on results obtained from computer simulations," Giovambattista said. "This counterintuitive hypothesis has been one of the most important questions in the chemistry and physics of water, and a controversial scenario since its beginnings. This is because experiments that can access the two liquid states in water have been very challenging due to the apparently unavoidable ice formation at the conditions where the two liquids should exist."

The usual "liquid" state of water that we are all familiar with corresponds to liquid water at normal temperatures (approximately 25 centigrade). However, the paper shows that water at low temperatures (approximately -63 centigrade) exists in two different liquid states, a low-density liquid at low pressures and a high-density liquid at high pressures. These two liquids have noticeably different properties and differ by 20% in density. The results imply that at appropriate conditions, water should exist as two immiscible liquids separated by a thin interface similar to the coexistence of oil and water.

Because water is one of the most important substances on Earth -- the solvent of life as we know it -- its phase behavior plays a fundamental role in different fields, including biochemistry, climate, cryopreservation, cryobiology, material science, and in many industrial processes where water acts as a solvent, product, reactant, or impurity. It follows that unusual characteristics in the phase behavior of water, such as the presence of two liquid states, can affect numerous scientific and engineering applications.

"It remains an open question how the presence of two liquids may affect the behavior of aqueous solutions in general, and in particular, how the two liquids may affect biomolecules in aqueous environments," Giovambattista said. "This motivates further studies in the search for potential applications." Giovambattista is a member of the Physics and Chemistry Ph.D. programs at The Graduate Center of The City University of New York (CUNY).