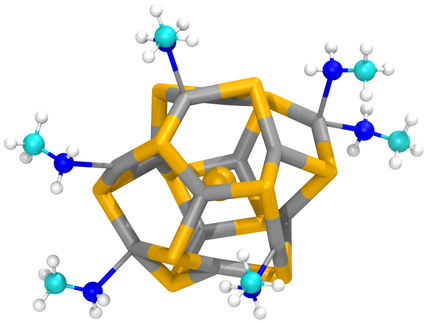 They are known as "magic sized nano clusters" because they have special properties: The particles consist of only a few atoms, but since they are arranged in a special crystal structure, they are extremely stable. Unless you expose them to light. Scientists from the Center for Nanointegration (CENIDE) at the University of Duisburg-Essen (UDE) have discovered that such materials undergo fundamental changes as soon as they are merely analysed using optical methods.

Junior professor Dr. Franziska Muckel is head of the working group "Electroenergetic Functional Materials" at the chair "Materials of Electrical Engineering”. Her team investigates cadmium selenide particles, which consist of no more than 26 atoms. Yet these atoms are arranged in a crystal structure, i.e. in a regular lattice similar to the symmetrical climbing frames made of ropes and metal on children's playgrounds. This structure renders the particles extremely stable.

In collaboration with the Seoul National University (South Korea) and the Max-Planck-Institut für Eisenforschung in Düsseldorf, UDE's researchers demonstrated that light above a certain wavelength weakens the bonds within these semiconductor nano clusters significantly – a hundred times more than in the same material with much larger dimensions.

Optical analysis methods as standard techniques in semiconductor research thus reach their limits in these dimensions: Instead of merely elucidating material properties, they change the investigated material itself. Since magic nano clusters are an important intermediate step on the way to larger functional particles, this is a decisive discovery.

Muckel, who conducts her research at the NanoEnergieTechnikZentrum (NETZ) on the Duisburg campus, now wants to put the results to practical use: "In the long term, we plan to develop components from similar materials that convert light into charge carriers and could therefore serve as optical sensors."