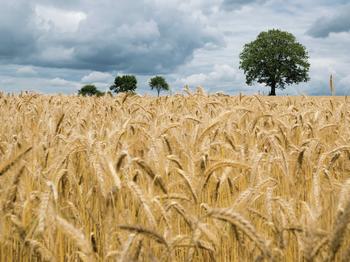 Photo by Kai Pilger on Unsplash

Every year around 734 million tons of wheat straw are produced worldwide, a large amount of waste, which is cheap and has had no well-defined use until now. Recently, the RNM-271 Chemical Engineering and FQM-383 NANOVAL Organic Chemistry research groups at the University of Córdoba have been able to give a new use to this agricultural excess material, by using it as the foundation in order to manufacture polyurethane foams.

Also known as foam rubber, this plastic material, often manufactured from petroleum by-products, is extremely versatile within the industry and has multiple uses in the construction and automobile sectors as a sealant as well as a thermal and acoustic insulator.

The new paper, published on the cover of Polymers, and on which Chile's Advanced Polymers Research Center (CIPA) also participated, has found a new purpose for this wheat waste. After this waste is liquefied, polyols are obtained. These polyols are one of the key compounds that play a role in the chemical reaction that makes polyurethane foams.

To date, castor oil has been one of the main candidates in the race to obtain sustainable polyurethane foam that does not require petroleum. The issue, as explained by one of the main authors of the paper, Esther Rincón, is that this vegetable oil "does not offer complete hardness and dryness once exposed to air", one of the keys to proper rubber foam formation.

For this reason, the new research proposed substituting 50% of this castor oil for wheat straw, with results that offer up very similar characteristics to those generated by traditional manufacturing processes that use non-renewable compounds: "We were able to obtain very desirable parameters in the manufacturing of foam, converting 96% of the wheat used with an almost maximum performance", explains Esther Rincón. In addition, as pointed out by the researcher, they obtained higher levels of biodegradability than those reached by the products currently on the market, meaning that this material takes less time to decompose.

While these new polyurethane foams could have infinite applications and even be manufactured with other kinds of biomass, the research group, in the second stage of their study, will use them in plant nurseries to help with plant growth. "Instead of watering the plant, and with the aim of dealing with drought problems and preventing overwatering, we would inject the water into the foam so that the plant can consume it as needed", explains the researcher.