Optimal information about the invisible

How do you measure objects that you can't see under normal circumstances? 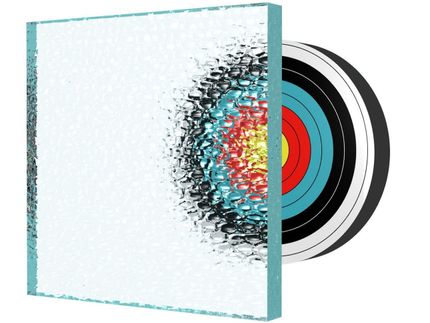 When light gets deflected by a disordered structure it becomes difficult to estimate where the target is located. In this new study a procedure is presented that allows one to reach the optimal estimation precision in such challenging scenarios.

Laser beams can be used to precisely measure an object’s position or velocity. Normally, however, a clear, unobstructed view of this object is required – and this prerequisite is not always satisfied. In biomedicine, for example, structures are examined, which are embedded in an irregular, complicated environment. There, the laser beam is deflected, scattered and refracted, often making it impossible to obtain useful data from the measurement.

However, Utrecht University (Netherlands) and TU Wien (Vienna, Austria) have now been able to show that meaningful results can be obtained even in such complicated environments. Indeed, there is a way to specifically modify the laser beam so that it delivers exactly the desired information in the complex, disordered environment - and not just approximately, but in a physically optimal way: Nature does not allow for more precision with coherent laser light. The new technology can be used in very different fields of application, even with different types of waves, and has now been presented in the scientific journal "Nature Physics".

The vacuum and the bathroom window

"You always want to achieve the best possible measurement accuracy – that's a central element of all natural sciences," says Stefan Rotter from TU Wien. "Let's think, for example, of the huge LIGO facility, which is being used to detect gravitational waves: There, you send laser beams onto a mirror, and changes in the distance between the laser and the mirror are measured with extreme precision." This only works so well because the laser beam is sent through an ultra-high vacuum. Any disturbance, no matter how small, is to be avoided.

But what can you do when you are dealing with disturbances that cannot be removed? "Let's imagine a panel of glass that is not perfectly transparent, but rough and unpolished like a bathroom window" says Allard Mosk from Utrecht University. "Light can pass through, but not in a straight line. The light waves are altered and scattered, so we can't accurately see an object on the other side of the window with the naked eye." The situation is quite similar when you want to examine tiny objects inside biological tissue: the disordered environment disturbs the light beam. The simple, regular straight laser beam then becomes a complicated wave pattern that is deflected in all directions.

However, if you know exactly what the disturbing environment is doing to the light beam, you can reverse the situation: Then it is possible to create a complicated wave pattern instead of the simple, straight laser beam, which gets transformed into exactly the desired shape due to the disturbances and hits right where it can deliver the best result. "To achieve this, you don't even need to know exactly what the disturbances are," Dorian Bouchet, the first author of the study explains. "It's enough to first send a set of trial waves through the system to study how they are changed by the system."

The scientists involved in this work jointly developed a mathematical procedure that can then be used to calculate the optimal wave from this test data: "You can show that for various measurements there are certain waves that deliver a maximum of information as, e.g., on the spatial coordinates at which a certain object is located."

Take for example an object that is hidden behind a turbid pane of glass: there is an optimal light wave that can be used to obtain the maximum amount of information about whether the object has moved a little to the right or a little to the left. This wave looks complicated and disordered, but is then modified by the turbid pane in such a way that it arrives at the object in exactly the desired way and returns the greatest possible amount of information to the experimental measuring apparatus.

The fact that the method actually works was confirmed experimentally at Utrecht University: Laser beams were directed through a disordered medium in the form of a turbid plate. The scattering behaviour of the medium was thereby characterised, then the optimal waves were calculated in order to analyse an object beyond the plate – and this succeeded, with a precision in the nano-meter range.

Then the team carried out further measurements to test the limits of their novel method: The number of photons in the laser beam was significantly reduced to see whether one then still gets a meaningful result. In this way, they were able to show that the method not only works, but is even optimal in a physical sense: "We see that the precision of our method is only limited by the so-called quantum noise," explains Allard Mosk. "This noise results from the fact that light consists of photons – nothing can be done about that. But within the limits of what quantum physics allows us to do for a coherent laser beam, we can actually calculate the optimal waves to measure different things. Not only the position, but also the movement or the direction of rotation of objects."

These results were obtained in the context of a program for nanometer-scale imaging of semiconductor structures, in which universities collaborate with industry. Indeed, possible areas of application for this new technology include microbiology but also the production of computer chips, where extremely precise measurements are indispensable.