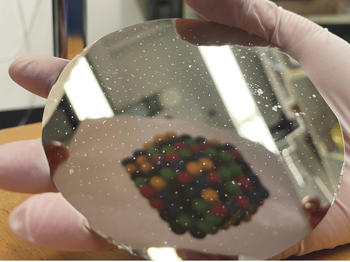 Hundreds of possible material combinations can be tested on such a carrier.

Finding the best material composition among thousands of possibilities is like looking for a needle in a haystack. An international team is combining computer simulations and high-throughput experiments to do this.

Catalysts consisting of at least five chemical elements could be the key to overcoming previous limitations in the production of green hydrogen, fuel cells, batteries or CO2 reduction. However, finding the optimal composition of these multi-element catalysts is like looking for a needle in a haystack: testing thousands to millions of possible combinations cannot be realized. Research teams from Ruhr-Universität Bochum (RUB) and the University of Copenhagen have therefore developed an approach that can predict the optimal composition and confirm its accuracy with high-throughput experiments.

Many electrochemical reactions go through several steps. Each should be optimized on a catalyst surface if possible, but different requirements apply to each step. “Since previous catalysts usually had only one optimized functionality, one could only make the best compromise possible, and energy losses could not be avoided,” explains Professor Wolfgang Schuhmann from the Center for Electrochemistry at RUB. With complex solid solutions, several functionalities can be realized simultaneously on one catalyst surface, overcoming this limitation. However, this only happens when at least five different elements are combined. There are millions of possibilities in which percentage ratios the respective elements can be combined. The previous challenge of searching for a strategy to find optimal properties seems to be answerable with this class of materials. Now the task is to find out which combination fulfills the goal in the best possible way. “Incidentally, this may also be possible with much more favorable elements than with previous catalysts,” Schuhmann emphasizes.

In their work, the research teams present an approach that offers guidance among the countless possibilities. “We have developed a model that can predict the activity for oxygen reduction as a function of composition, thus enabling calculation of the best composition,“ explains Professor Jan Rossmeisl from the Center for High Entropy Alloy Catalysis at University of Copenhagen.

The team from Bochum provided the verification of the model. “We can use a combinatorial sputtering system to produce material libraries where each point on the surface of the support has a different composition and there are different but well-defined gradients in each direction,” explains Professor Alfred Ludwig from the Chair of New Materials and Interfaces at RUB. Using a scanning droplet cell, the catalytic properties of 342 compositions on a material library are then automatically measured to identify activity trends.

“We found that the original model did not yet do justice to the complexity and still made imprecise predictions. Therefore, we revised it and had it tested again experimentally,” says Dr. Thomas Batchelor from the Copenhagen team, who was a visiting scientist at RUB as part of the collaboration. This time, prediction and experimental measurement showed excellent agreement, which was confirmed by further material libraries.

This strategy allows the complex mechanisms at the surfaces, which consist of five chemical elements, to be identified, leaving most of the screening effort to the computer. “If the model turns out to be universally applicable to all element combinations and also to other reactions, one of the currently biggest challenges of this catalyst class would be realistically met,” the team said.