Did Darwinian evolution begin before life itself?

How long-chain molecules are formed 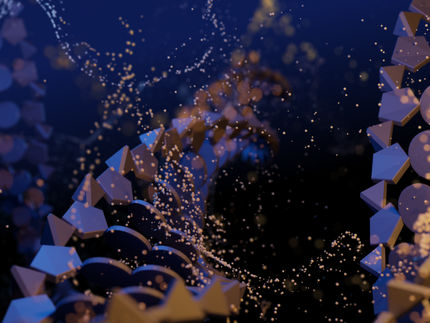 How long-chain molecules are formed.

Before life emerged on Earth, many physicochemical processes on our planet were highly chaotic. A plethora of small compounds, and polymers of varying lengths, made up of subunits (such as the bases found in DNA and RNA), were present in every conceivable combination. Before life-like chemical processes could emerge, the level of chaos in these systems had to be reduced. In a new study, LMU physicists led by Dieter Braun show that basic features of simple polymers, together with certain aspects of the prebiotic environment, can give rise to selection processes that reduce disorder.

In previous publications, Braun’s research group explored how spatial order could have developed in narrow, water-filled chambers within porous volcanic rocks on the sea bottom. These studies showed that, in the presence of temperature differences and a convective phenomenon known as the Soret effect, RNA strands could locally be accumulated by several orders of magnitude in a length-dependent manner. “The problem is that the base sequences of the longer molecules that one obtains are totally chaotic“, says Braun.

Evolved ribozymes (RNA-based enzymes) have a very specific base sequence that enable the molecules to fold into particular shapes, while the vast majority of oligomers formed on the Early Earth most probably had random sequences. “The total number of possible base sequences, known as the ‘sequence space’, is incredibly large,” says Patrick Kudella, first author of the new report. “This makes it practically impossible to assemble the complex structures characteristic of functional ribozymes or comparable molecules by a purely random process.” This led the LMU team to suspect that the extension of molecules to form larger ‘oligomers’ was subject to some sort of preselection mechanism.

Since at the time of the Origin of Life there were only a few, very simple physical and chemical processes compared to the sophisticated replication mechanisms of cells, the selection of sequences must be based on the environment and the properties of the oligomers. This is where the research of Braun's group comes in. For catalytic function and stability of oligomers, it is important that they form double strands like the well-known helical structure of DNA. This is an elementary property of many polymers and enables complexes with both double- and single-stranded parts. The single-stranded parts can be reconstructed by two processes. First, by so-called polymerization, in which strands are completed by single bases to form complete double strands. The other is by what is known as ligation. In this process, longer oligomers are joined together. Here, both double-stranded and single-stranded parts are formed, which enable further growth of the oligomer.

“Our experiment starts off with a large number of short DNA strands, and in our model system for early oligomers we use only two complementary bases, adenine and thymine“, says Braun. “We assume that ligation of strands with random sequences leads to the formation of longer strands, whose base sequences are less chaotic.” Braun‘s group then analyzed the sequence mixtures produced in these experiments using a method that is also used in analyzing the human genome. The test confirmed that the sequence entropy, i.e. the degree of disorder or randomness within the sequences recovered, was in fact reduced in these experiments.

Emergence of life from chaos

The researchers were also able to identify the causes of this ‘self-generated’ order. They found that the majority of sequences obtained fell into two classes – with base compositions of either 70% adenine and 30% thymine, or vice versa. “With a significantly larger proportion of one of the two bases, the strand cannot fold onto itself and remains as a reaction partner for the ligation”, Braun explains. Thus, hardly any strands with half of each of the two bases are formed in the reaction. "We also see how small distortions in the composition of the short DNA pool leave distinct position-dependent motif patterns, especially in long product strands," Braun says. The result surprised the researchers, because a strand of just two different bases with a specific base ratio has limited ways to differentiate from each other. "Only special algorithms can detect such amazing details," says Annalena Salditt, co-author of the study.

The experiments show that the simplest and most fundamental characteristics of oligomers and their environment can provide the basis for selective processes. Even in a simplified model system, various selection mechanisms can come into play, which have an impact on strand growth at different length scales, and are the results of different combinations of factors. According to Braun, these selection mechanisms were a prerequisite for the formation of catalytically active complexes such as ribozymes, and therefore played an important role in the emergence of life from chaos.