First closeups of how a lithium-metal electrode ages 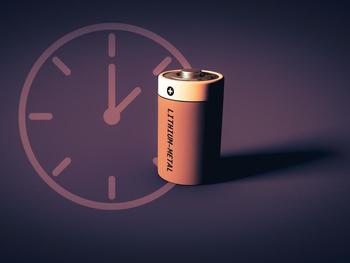 Scientists at SLAC National Accelerator Laboratory and Stanford University have documented a process called calendar aging that can cause lithium-metal batteries to lose 2-3% of their charge in just 24 hours even when a device is turned off, and cut its lifetime by 25%. The study suggests that choosing the right electrolyte can minimize the clumpy corrosion that causes aging.

The same process that drains the battery of your cell phone even when it's turned off is even more of a problem for lithium-metal batteries, which are being developed for the next generation of smaller, lighter electronic devices, far-ranging electric vehicles and other uses.

Now scientists at Stanford University and the Department of Energy's SLAC National Accelerator Laboratory have taken the first atomic-scale look at how this process, called "calendar aging", attacks lithium-metal anodes, or negative electrodes. They discovered that the nature of the battery electrolyte, which carries charge between the electrodes, has a big impact on aging - a factor that needs to be taken into account when developing electrolytes that maximize a battery's performance.

The study also revealed that calendar aging can drain 2-3% of a lithium-metal battery's charge in just 24 hours - a loss that would take three years in a lithium-ion battery. Although this charge seepage slows over time, it quickly adds up and can reduce the battery's lifetime by 25%.

"Our work suggests that the electrolyte can make a big difference in the stability of stored batteries," said SLAC and Stanford Professor Yi Cui, who led the study with Stanford Professor Zhenan Bao. "This is something people haven't really spent time looking at or using as a way to understand what's going on."

Like today's lithium-ion batteries, lithium-metal batteries use lithium ions to ferry charge back and forth between the electrodes. But where lithium-ion batteries have anodes made of graphite, lithium-metal batteries have anodes made of lithium metal, which is much lighter and has the potential to store a lot more energy for a given volume and weight. This is especially important for electric vehicles, which spend a significant amount of energy lugging their heavy batteries around. Lightening their load could drop their cost and increase their driving range, making them more appealing to consumers.

The DOE's Battery 500 Consortium, including SLAC and Stanford, has a goal of developing lithium-metal batteries for electric vehicles that can store almost three times as much charge per unit weight as today's EV batteries. While they've made a lot of progress in increasing the energy density and lifetime of these batteries, they still have a ways to go. They're also wrestling with the problem of dendrites, finger-like growths on the anode that can make a battery short out and catch fire.

Over the past few years, Bao and Cui, who are investigators with the Stanford Institute for Materials and Energy Sciences at SLAC, have teamed up to find solutions to these problems, including a new coating to prevent dendrite growth on lithium-metal anodes and a new electrolyte that also keeps dendrites from growing.

Most such studies have focused on minimizing damage caused by repeated charging and discharging, which strains and cracks electrodes and limits the battery's working lifetime, said David Boyle, a PhD student in Cui's lab.

But in this study, he said, the team wanted to test a variety of electrolytes with different chemical makeups to get a general picture of how lithium-metal anodes age.

First, Boyle measured the charging efficiency of lithium-metal batteries containing various types of electrolytes. Then he and fellow PhD student William Huang carefully dismantled batteries that had been fully charged and left to sit for a day, removed the anode and flash froze it in liquid nitrogen to preserve its structure and chemistry at a specific point in the calendar aging process.

Next, Huang examined the anodes with a cryogenic electron microscope, or cryo-EM, on the Stanford campus to see how the various electrolytes affected the anode at close to atomic scale. It's an approach Cui's group pioneered a few years ago for looking at the inner lives of battery components.

In today's lithium-ion batteries, the electrolyte corrodes the surface of the anode, creating a layer called the solid-electrolyte interphase, or SEI. This layer is both Jekyll and Hyde: It consumes a small amount of battery capacity, but it also protects the anode from further corrosion. So on balance, a smooth, stable SEI layer is good for battery functioning.

But in lithium-metal batteries, a thin layer of lithium metal is deposited on the surface of the anode every time the battery charges, and this layer offers a fresh surface for corrosion during calendar aging. In addition, "We found much more aggressive growth of the SEI layer on these anodes due to more aggressive chemical reactions with the electrolyte," Huang said.

Each electrolyte they tested gave rise to a distinctive pattern of SEI growth, with some forming clumps, films or both, and those irregular growth patterns were associated with faster corrosion and a loss of charging efficiency.

Contrary to expectations, electrolytes that would otherwise support highly efficient charging were just as prone to drops in efficiency due to calendar aging as poorly performing electrolytes, Cui said. There was no one electrolyte chemistry that did both things well.

So to minimize calendar aging, the challenge will be to minimize both the corrosive nature of the electrolyte and the extent of the lithium metal on the anode's surface that it can attack.

"What's really important is that this gives us a new way of investigating which electrolytes are most promising," Bao said. "It points out a new electrolyte design criterion for achieving the parameters we need for the next generation of battery technology."