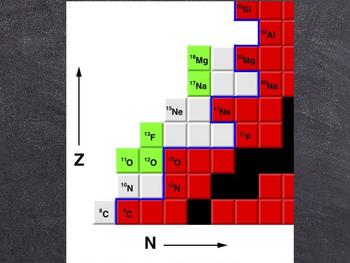 Chart of nuclides showing the isotopes Robert J. Charity and Lee G. Sobotka discovered in green (stable isotopes are indicated by black squares, and the proton drip line is shown in blue). The new fluorine isotope, 13F, is the most removed from the drip line.

Researchers at Washington University in St. Louis reported the first observations of a new form of fluorine, the isotope 13F, described in the journal Physical Review Letters.

They made their discovery as part of an experiment conducted at the National Superconducting Cyclotron Laboratory at Michigan State University (MSU).

Fluorine is the most chemically reactive element on the periodic table. Only one isotope of fluorine occurs naturally, the stable isotope 19F. The new isotope, 13F, is four neutrons removed from the proton drip line, the boundary that delimits the zone beyond which atomic nuclei decay by the emission of a proton.

"Study of exotic nuclei with such large excesses of neutrons or protons is of considerable interest in understanding the synthesis of elements, even though their lifetimes are extremely short," Charity said. "Many of these isotopes have exotic properties."

The isotope 13F is the fifth new isotope that Charity and Sobotka have discovered together.

"All the new isotopes are very proton-rich and unstable to the emission of protons," Charity said. "The highest-energy protons inside these isotopes can tunnel through the Coulomb barrier and escape."

The initial purpose of the experiment, Charity said, was to make a new isotope of oxygen, dubbed "featherweight oxygen," a technical achievement previously reported in Physical Review Letters. After making that discovery, the researchers went through their data again with great care and teased out evidence for 13F.

The new isotope of fluorine was created via a charge-exchange reaction with a beam of 13O. (A neutron in the 13O is removed and replaced by a proton.)

"Such charge-exchange reactions have not typically been used for the creation of the very proton-rich isotopes in the past," Charity said. "However, we are already planning a search for another new isotope using this reaction mechanism."