The Fastest One Wins 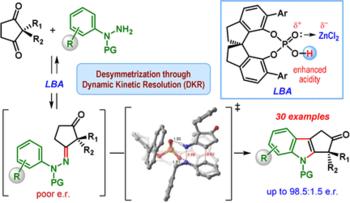 Indole, and structures derived from it, are a component of many natural substances, such as the amino acid tryptophan. A new catalytic reaction produces cyclopenta[b]indoles—frameworks made of three rings that are joined at the edges—very selectively and with the desired spatial structure. As a research team reports in the journal Angewandte Chemie, the rates of the different steps of the reaction play a critical role.

Indole derivates are widely distributed in nature; they are part of serotonin and melatonin, as well as many alkaloids—some of which are used as drugs, for example, as treatments for Parkinson’s disease. Indole is an aromatic six-membered ring fused to a five-membered ring along one edge. The five-membered ring has a double bond and a nitrogen atom. The basic indole framework can be equipped with a variety of side groups or bound to additional rings. Indole and many indole derivatives can be made by an indole synthesis reaction developed by and named after Emil Fischer (acid-assisted condensation of ketones with phenyl hydrazines).

The most important class of indole derivatives are cyclopentane[b]indoles—molecules with a framework made of one indole unit and an additional five-membered ring. This five-membered ring can contain a chiral carbon center, which is a ring carbon that has two additional side groups, and it can be arranged in two ways that are mirror images of each other. Only one of the two enantiomers, or mirror images, is found in nature. However, the classic Fischer indole synthesis produces a mix of both enantiomers.

A team led by Santanu Mukherjee and Garima Jindal at the Indian Institute of Science, Bangalore (India) has now developed a catalytic version of the Fischer indole synthesis that primarily produces one of the enantiomers (i.e., the reaction is enantioselective). The starting materials are a class of diketones (2,2-disubstituted cyclopentane-1,3-diones) and phenylhydrazine derivatives equipped with special protecting groups. The secret of their success is a special catalyst: a chiral, cyclic phosphoric acid. The reaction is carried out in the presence of zinc chloride as a co-catalyst and an acidic cation-exchange resin, which captures the ammonia that forms as a byproduct.

This method made it possible for the team to produce many different indole derivatives in moderate yields, but with good to excellent enantiomeric selectivity.