A three-shell nanoreactor for funktionalised fullerene 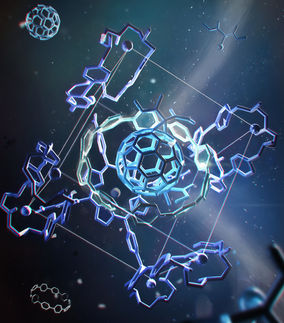 The image shows the molecular matryoshka used for the functionalisation of the fullerene C60. The multi-shell reactor is based on three nested molecular structures that resemble a soccer ball (fullerene molecule, inside), a hula hoop and a cage.

A Catalan-German research team has succeeded in using a three-shell 'matryoshka' architecture to solve a long-standing problem in chemical synthesis. The researchers from Girona and Ulm have developed a three-dimensional construct of nested molecules, which is best imagined as a soccer ball stuck in a hula hoop, which in turn is embedded in a cage. With the help of this molecular 'matryoshka', the molecular soccer balls can be converted with record efficiency into products that are used in the latest generation of solar cells.

Fullerenes are unique chemical species. Their structure and shape resemble a soccer ball. Yet they consist of pure carbon - more precisely, an extremely thin layer that is only one atom thick. Organic solar cells of the latest generation use specifically functionalised forms of these molecular soccer balls as transporters of charge. 'Until now, the production of precisely functionalised fullerenes has been very difficult due to the formation of a large number of unwanted by-products. The target molecules therefore have to be painstakingly purified, which is an impediment for their widespread application,' explains Max von Delius, head of the Institute of Organic Chemistry I at Ulm University. The international research team led by Professor Xavi Ribas from the University of Girona and Professor Max von Delius has developed a highly selective method for functionalising the fullerene C60 in a way that does not require any complex purification steps and, overall, achieves a yield of over 90% for a so called trans-3 bisadduct - a new record. The three-shell nanoreactor, which is reminiscent of a 'matryoshka' doll, has now been published in the journal Nature Chemistry.

A 'matryoshka' is a Russian doll made of thinly-carved wood. It consists of a series of increasingly smaller wooden dolls that are nested inside each other. 'With the molecular matryoshka, our research team has succeeded in "nesting" different chemical reaction spaces within each other in a similar way,' explains Professor Xavi Ribas. At the centre of this reaction space is the football-shaped fullerene molecule that is to be chemically modified. This is surrounded by a rotating 'nanohoop', which is restricted by the outer shell in its rotation in one dimension and therefore shields parts of the fullerene surface from the reagents. The chemical 'hula hoop' consists of cyclic organic compounds that form a stable ring-shaped molecular structure. The construct of football and nanohoop is in turn embedded in a molecular 'cage' that forms the outer layer of the matryoshka. The reaction space is closed at the top and bottom, but has a 'window' on each of the four sides through which the functionalisation reagents can enter the nanoreactor.

For the chemical realisation of the matryoshka principle, the molecular architects made use of special chemical forces such as 'pi-pi' interactions, which act between the 'soccer ball', 'hoop' and 'cage' and thus give the structure both support and at the same time a certain degree of flexibility. 'In supramolecular chemistry, a special field of organic chemistry, the encapsulation of chemical species within others is known as a host-guest architecture. With our "matryoshka" design, we have succeeded for the first time in using a three-shell host-guest system for solving a problem of chemical synthesis,' say Ernest Ubasart (University of Girona) and Oleg Borodin (Ulm University), who were involved in the study as lead authors.

The multi-shell nanoreactor has the task of precisely selecting which carbon binding sites of the fullerene are accessible for chemical modification. This functionalisation is achieved via so-called addition reactions that install chemical appendages carrying specific functional groups. The researchers highlight that 'using the "matryoshka" architecture, [they] were able to synthesise certain fullerene bis-adducts in perfect purity, whereas conventional reactions of this type give rise to more than a dozen undesirable reaction products.'

The German-Catalan collaboration also has a unique story of how it came to be. 'Xavi Ribas and I met at an international research conference and participated in the "poster session". I quickly noticed a poster by Carles Fuertes, a member of Xavi’s research group. It had the same objective as the project we were presenting, but was based on a completely different molecular design,' says Professor Max von Delius. The common theme was the precise functionalisation of the C60 molecule. While the Ulm team was researching a suitable 'nanohoop' solution, Professor Xavi Ribas' group at the University of Girona was working on a 'cage' concept. Both approaches on their own, however, left certain aspects to be desired. So why not combine the two designs? 'This scientific collaboration was incredibly exciting for all of us. I still remember how excited we were and kept running back and forth between the two posters,' Ribas recalls this particular 'eureka' experience. In the end, the researchers not only achieved the 'soccer ball, hoop and cage' solution, but also realised that a scientific collaboration is much more than the sum of its parts.