Green hydrogen: "Rust" as a photoanode and its limits

“With this new approach, we have added a powerful tool to our arsenal that enables us to identify the realizable potential of photoelectrode materials" 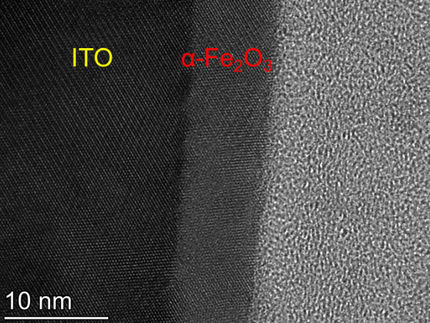 Rust would be an extremely cheap and stable photoelectrode material to produce green hydrogen with light. But the efficiency is limited. The TEM image shows a photoanode containing a thin photoactive layer of rust.

Metal oxides such as rust are intriguing photoelectrode materials for the production of green hydrogen with sunlight. They are cheap and abundant, but in spite of decades of research, progress has been limited. A team at HZB, together with partners from Ben Gurion University and the Technion, Israel, has now analysed the optoelectronic properties of rust (haematite) and other metal oxides in unprecedented detail. Their results show that the maximum achievable efficiency of haematite electrodes is significantly lower than previously assumed. The study demonstrates ways to assess new photoelectrode materials more realistically.

Hydrogen will be needed in large quantities as an energy carrier and raw material in the energy system of the future. To achieve this, however, hydrogen must be produced in a climate-neutral way, for example through so-called photoelectrolysis, by using sunlight to split water into hydrogen and oxygen. As photoelectrodes, semiconducting materials are needed that convert sunlight into electricity and remain stable in water. Metal oxides are among the best candidates for stable and inexpensive photoelectrodes. Some of these metal oxides also have catalytically active surfaces that accelerate the formation of hydrogen at the cathode or oxygen at the anode.

Why is rust not much better?

Research has long focused on haematite (α-Fe2O3), which is widely known as rust. Haematite is stable in water, extremely inexpensive and well suited as a photoanode with a demonstrated catalytic activity for oxygen evolution. Although research on haematite photoanodes has been going on for about 50 years, the photocurrent conversion efficiency is less than 50% of the theoretical maximum value. By comparison, the photocurrent efficiency of the semiconductor material silicon, which now dominates almost 90% of the photovoltaic market, is about 90% of the theoretical maximum value.

Scientists have puzzled over this for a long time. What exactly has been overlooked? What is the reason that only modest increases in efficiency have been achieved?

In a recent study published in Nature Materials, however, a team led by Dr. Daniel Grave (Ben Gurion University), Dr. Dennis Friedrich (HZB) and Prof. Dr. Avner Rothschild (Technion) has provided an explanation as to why haematite falls so far short of the calculated maximum value. The group at Technion investigated how the wavelength of absorbed light in hematite thin films affects the photoelectrochemical properties, while the HZB team determined the wavelength dependent charge carrier properties in thin films of rust with time-resolved microwave measurements.

By combining their results, the researchers succeeded in extracting a fundamental physical property of the material that had generally been neglected when considering inorganic solar absorbers: The photogeneration yield spectrum. "Roughly speaking, this means that only part of the energy of the light absorbed by haematite generates mobile charge carriers, the rest generates rather localised excited states and is thus lost," Grave explains.

Rust will not get much better

"This new approach provides experimental insight into light-matter interaction in haematite and allows distinguishing its optical absorption spectrum into productive absorption and non-productive absorption," Rothschild explains. "We could show that the effective upper limit for the conversion efficiency of haematite photoanodes is significantly lower than that expected based on above band-gap absorption," says Grave.  According to the new calculation, today's “champion” haematite photoanodes have already come quite close to the theoretically possible maximum. So it doesn't get much better than that.

The approach has also been successfully applied to TiO2, a model material, and BiVO4, which is currently the best-performing metal oxide photoanode material. “With this new approach, we have added a powerful tool to our arsenal that enables us to identify the realizable potential of photoelectrode materials. Implementing this to novel materials will hopefully expedite the discovery and development of the ideal photoelectrode for solar water splitting. It would also allow us to ‘fail quickly’, which is arguably just as important when developing new absorber materials“ says Friedrich.