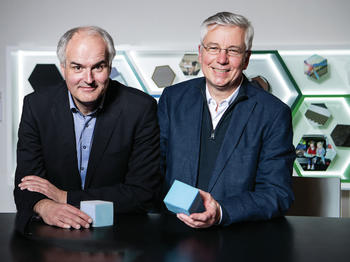 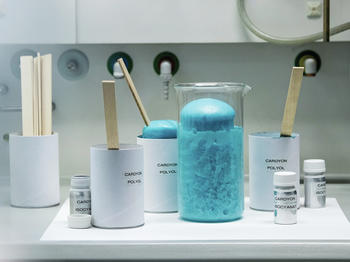 Technique is accelerating the shift to the circular economy by enabling commercially viable re-use of CO₂. A product of collaboration between industry and academia, the breakthrough reduces the amount of crude oil used in the production of essential everyday products, from mattresses and flooring to car interiors.

The European Patent Office (EPO) announces that German chemists Christoph Gürtler and Walter Leitner have been nominated as finalists in the "Industry" category of the European Inventor Award 2021 for their roles in developing a new technique to utilise waste carbon dioxide (CO2) as raw material in the production of foams and polymers. Their method, a product of their respective industrial and academic backgrounds, uses chemical catalysts to drive reactions between CO2 and a crude oil derivative, producing polymers, e.g. polyurethane plastics, in a sustainable and commercially viable way.

6% of the oil produced worldwide is used in the production of plastics, which means that finding an alternative source of carbon is a priority, both for the plastic industry and for the environment. The solution, initiated and developed by Gürtler, Head of Catalysis and Technology Incubation at plastic polymer manufacturer Covestro, and Leitner, Director at the Max Planck Institute for Chemical Energy Conversion and Professor for Chemical Technology at RWTH Aachen University, facilitates an up to 20% reduction in the amount of fossil feedstocks required to make a polyurethane precursor, while also providing a use for waste CO₂ from other industries. The patent portfolio for CO2-based polyols is enabling the more sustainable production of everyday products ranging from mattresses, flooring and interior car parts through to textiles, building insulation and surfactants.

"By solving a puzzle that had eluded many other teams of scientists, Christoph Gürtler, Walter Leitner and their colleagues have taken a big step towards closing the carbon loop," says EPO President António Campinos, announcing the European Inventor Award 2021 finalists. "Their work has solved a decades-old problem and their success illustrates the value of industry and academia working together to overcome challenges facing humanity."

The winners of the 2021 edition of the EPO's annual innovation prize will be announced at a ceremony starting at 19:00 CEST on 17 June which has this year been reimagined as a digital event for a global audience.

As a class of polymers, polyurethanes are widely used as foams and plastics to make furniture, insulating material, sports equipment and components within electronic devices. Although very useful as a material in their use phase, polyurethanes need large amounts of crude oil to source the carbon required for production.

Many chemists have unsuccessfully tried to find ways to make CO2-based polymers, with the aim of replacing some of the crude oil-derived compounds used to make these important chemical precursors. Previous attempts were too energy-intensive and expensive to be commercially viable.

With 50 years of combined experience in the fields of chemistry, petrochemistry and catalyst research, Gürtler and Leitner saw this obstacle as a challenge. Empowered by the industry-academia collaboration between Covestro (at the time still known as Bayer MaterialScience), Gürtler's employer, and RWTH Aachen University, where Leitner is Professor, the pair and their teams began investigating the potential of previously examined catalysts, assessing their effectiveness in converting CO2 into useful materials.

Catalysts are used within chemical and industrial contexts to trigger or speed up reactions between substances, without becoming part of the end products.

Gürtler and Leitner combined the competencies of their industrial and academic teams to reassess previous attempts to use these catalysts to drive reactions between CO₂ and crude oil derivatives. Their research found that a reaction involving chemical compounds derived from crude oil, CO₂ and other starting materials in the presence of a suitable catalyst would have the desired effect. The resulting material was developed and later brought to market by Covestro as cardyon®, a chain-like molecule with two or more hydroxyl groups, otherwise known as a polyol.

As a chemical precursor, cardyon can be applied in exactly the same way as other high-quality polymer intermediates. It is used, for example, in the production of flexible foams for mattresses and as a binder for padded sports floorings. In 2019, Covestro announced that the material can also be made into stretchy textile fibres used in clothing, such as in socks.

Gürtler, who is named as an inventor in 173 European patents, and Leitner, who is named in 75 European patents, have together stressed the importance of the patenting system in protecting novel technologies in their field. They have emphasised that the patents covering cardyon and its related processes rest on scientific foundations laid by many others over a long period of time, with Leitner describing the pair as the "architects" of the industry-academia collaboration that lead to the innovation. "At the same time it is self-evident, that the entire development beyond its initiation requires a huge team of scientists, engineers, and many more, whose contribution is decisive to make the new technology reality. We greatly acknowledge this collaboration and the team's work," Gürtler says.

cardyon - the CO₂-based patented product initiated and developed by Gürtler and Leitner - was commercialised by a highly specialized team at Covestro, a spin-off of German multinational Bayer AG, formed in 2015. The company is a polyurethane market leader and employs about 16 500 staff globally. At its pilot plant in Dormagen, Germany, Covestro produces up to 5 000 tonnes of cardyon by using CO₂ from a nearby ammonia production plant.

Gürtler, Leitner and their teams are researching new uses for the material beyond its current application. They believe that the versatility of their process means that there is the potential to produce polyurethane precursors to be used in the production of a wide range of products, with soft foams being just one example. Preliminary research also suggests products made with cardyon may be easier to recycle than those made purely from crude oil-based chemicals.

Covestro continues to invest in R&D and extend this technology platform to a variety of chemical building blocks. In 2021, the company announced  breakthroughs in terms of the application of its material to the production of polyurethane insulation boards and of surface active ingredient formulations.

If further research continues to show that Gürtler and Leitner's innovation can be applied to a wider range of polyurethane-based production processes, then there is hope that their invention could lead to a much greater reduction in crude oil use, in parallel to the utilisation of vast quantities of waste CO₂, ultimately playing a significant role in closing the carbon loop. "If sustainability is the goal," says Leitner, "then green chemistry is the way."