Using the smallest "construction set" in the world, a research team is designing new materials for computer chips, light-emitting diodes and solar cells 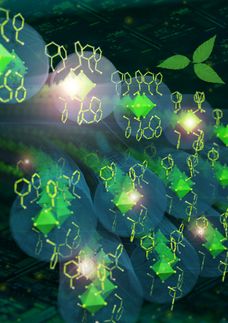 They are 50,000 times thinner than a human hair, and just a few atoms thick: two-dimensional materials are the thinnest substances it is possible to make today. They have completely new properties and are regarded as the next major step in modern semiconductor technology. In the future they could be used instead of silicon in computer chips, light-emitting diodes and solar cells. Until now, the development of new two-dimensional materials has been limited to structures with layers of rigid chemical bonds in two spatial directions - like a sheet of paper in a stack. Now for the first time, a research team from the universities of Marburg, Giessen and Paderborn, led by Dr. Johanna Heine (Inorganic Chemistry, Philipps University of Marburg) has overcome this limitation by using an innovative concept. The researchers developed an organic-inorganic hybrid crystal which consists of chains in a single direction, yet still forms two-dimensional layers in spite of this. This makes it possible to combine different material components, like pieces in a construction set, to create tailored materials with innovative properties.

In this project, the research team combined the advantages of two-dimensional materials and hybrid perovskites - the eponymous mineral perovskite is well-known for its optoelectronic properties, and can be combined with other materials to improve these characteristics. "What is special about this is that it offers completely new options for targeted design of future functional materials," says Dr. Johanna Heine, a chemist and junior research group leader at the University of Marburg, describing this highly topical research area which has great application potential. "This physical effect - first discovered here - could make it possible to tune the colour of future lighting and display technologies in a simple and targeted way," says physicist Philip Klement, lead author and doctoral student in the research group led by Professor Sangam Chatterjee at the Justus Liebig University of Giessen (JLU).

The work was carried out in an interdisciplinary collaboration: Dr. Johanna Heine's team at the University of Marburg first developed the chemical synthesis and created the material as a single bulk crystal. Philip Klement and Professor Chatterjee's team at JLU then used these crystals to produce individual atomically thin layers and investigated them using optical laser spectroscopy. They found a spectrally broadband ("white") light emission, whose colour temperature can be tuned by changing the thickness of the layer. Working closely with Professor Stefan Schumacher and his team of theoretical physicists at Paderborn University the researchers made a microscopic study of the effect and were able to improve the properties of the material.

In this way the researchers were able to cover the entire process from synthesis of the material and understanding its properties, to modelling the properties.