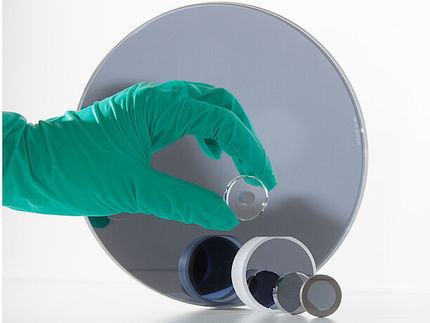 In an international cooperation with partners from industry and research, physicists from the University of Vienna, together with Thorlabs, the National Institute of Standards and Technology (NIST), and the University of Kansas, have now succeeded for the first time in demonstrating high-performance laser mirrors in the sensing-relevant mid-infrared wavelength range that absorb less than ten out of a million photons. Manufactured in a new process based on crystalline materials, these low-loss mirrors promise to open up completely new application areas, for example in optical respiratory gas analysis for early cancer detection or the detection of greenhouse gases. This work will be published in the current issue of the journal "Optica".

In 2016 researchers at the LIGO laser interferometer succeeded in the first direct observation of gravitational waves, which had originally been predicted by Albert Einstein in 1916. A significant contribution to the observation of this wave-like propagation of disturbances in space-time, which was rewarded with the Nobel Prize a year later, was provided by the laser mirrors of the kilometer-long interferometer assembly. Optimization of these mirrors for extremely low optical absorption losses was a key advancement in realizing the sensitivity necessary to make such measurements. "Low-loss mirrors are a key technology for many different research fields," explains Oliver H. Heckl, head of the Christian Doppler Laboratory for Mid-IR Spectroscopy and Semiconductor Optics, "They are the link for such diverse research fields as cancer diagnosis and gravitational wave detection."

In fact, comparable mirror properties are also promising technological breakthroughs for significantly more practical applications. This includes, among other things, sensitive molecular spectroscopy, i.e. the detection of the smallest amounts of substances in gas mixtures - a research focus of the Christian Doppler Laboratory (CDL). Examples can be found in the early detection of cancer through the detection of the smallest concentrations of marker molecules in the breath of patients, or in the precise detection of methane leaks in large-scale natural gas production systems in order to limit the contribution of such greenhouse gases to climate change.

Unlike the experiments at LIGO, however, such investigations are conducted much further outside the visible light spectrum, in the mid-infrared range. In this wavelength region, also known as the "fingerprint region", many structurally similar molecules are clearly distinguishable on the basis of their characteristic absorption lines. Therefore, it is a longstanding wish of the photonics community, to realize similarly low loss levels in this technically challenging wavelength range.

This is exactly what the team led by Oliver H. Heckl has now achieved in an international cooperation. In this case, low loss means that the new type of mirror absorbs less than 10 out of a million photons. For comparison: A commercially available bathroom mirror "destroys" around ten thousand times more photons, and even the mirrors used in top research have ten to a hundred times higher losses.

This drastic improvement was made possible through the use of a completely new optical coating technology: First, single-crystal stacks of high-purity semiconductor materials are deposited via an epitaxial growth process. These monocrystalline multilayers are then transferred via a proprietary bonding process onto curved silicon optical substrates, completing the mirrors that were tested at both the CDL and NIST. This unique "crystalline coating" technology was developed and carried out by the industrial partner of the Christian Doppler Laboratory, Thorlabs Crystalline Solutions. This company was originally founded under the name Crystalline Mirror Solutions (CMS) in 2013 as a spin-off from the University of Vienna by Garrett Cole and Markus Aspelmeyer. CMS was acquired by Thorlabs Inc. in December 2019. This industry collaboration was made possible, with the support of the Federal Ministry for Digital and Economic Affairs, via the internationally unique model of the Christian Doppler Research Association (CDG) to promote application-oriented basic research. A research group led by Adam Fleisher from the National Institute for Standards and Technology (NIST) in Gaithersburg, Maryland (USA), which is renowned for precision measurements, also played a key role in this success. Georg Winkler, co-author of the current study expresses his enthusiasm: "Precise measurement technology is much more than just pedantry. Wherever you can take a closer look by an order of magnitude, you usually discover completely new phenomena, just think of the invention of the microscope and telescope!"

In fact, this assessment has already proven true in the detailed characterization of the new mirrors themselves, when a previously unknown effect of polarization-dependent absorption was discovered in the semiconductor layers and theoretically explored by collaborator Prof. Hartwin Peelaers at the University of Kansas. "These results open up great opportunities regarding further refinement of these mirrors ", co-author Lukas Perner is delighted: "Thanks to the extremely low losses can we now further optimize the bandwidth and reflectivity."

With this in mind, the project partners are already working on a further improvement of the technology: Expansion of the optical bandwidth of the mirrors will allow them to be used efficiently with so-called optical frequency combs. This will enable the analysis of particularly complex gas mixtures with unprecedented accuracy.