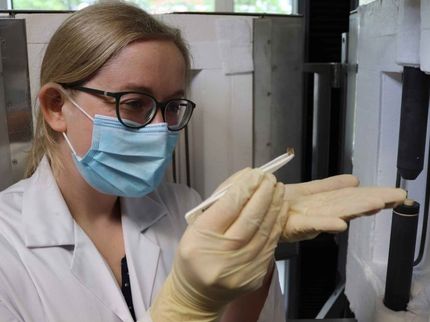 Electroceramics such as capacitors are essential components in electronic devices. Intervening in their crystalline structure can change specific properties. Thus, for instance, chemical methods can be used to replace individual atoms in the crystal lattice with others. A stable shape can be created by replacing a whole series of atoms rather than just a single one. An international team of researchers under the leadership of the TU Darmstadt has, for the first time, succeeded in inserting a dislocation into a ferroelectric ceramic by mechanically imprinting the atoms in the material – a procedure that hitherto has only ever been used in metals.

The world market for electroceramics is in the region of 25 billion euros a year. These very small components are often not even perceived in daily life. A smartphone alone contains 600 capacitors, 3 trillion – that's 3000 billion – of which are manufactured every year. The way many electroceramics function is not based on current flow through the material, but on small charge dislocations, called polarisation, over fractions of an atomic diameter. About a quarter of the electroceramics produced in the world link this polarisation to an extension of the material, which in turn can be adjusted to the accuracy of an atomic diameter. Only then can ever-smaller computer components and microrobots be structured.

Replacing atomic series in the atom

The properties of the electroceramics can be improved by using chemical interventions to replace individual atoms in the regularly shaped crystal lattice with others (endowing) – a little like sitting a single Borussia Dortmund fan in a black-and-yellow jersey in a cinema full of FC Bayern Munich fans in red tops. However, where there are special requirements, such as a higher temperature or electric voltage, the endowed atom would lose its place (the fan would be pushed around), much to the detriment of the function of the ceramic.

The installation of individual atoms in a ceramic crystal lattice is not stable enough for complex requirements, but the installation of entire atomic series (displacement) is robust. In the football example, this would correspond to having a row of Borussia fans in among the Bayern fans. Material scientists from three working groups of the TU Darmstadt are cooperating with research groups from Switzerland, the Netherlands and the USA in the research on these displacements.

“Chemical methods are no longer sufficient for planned displacements,” explains Professor Jürgen Rödel, Head of the research group of Non-Metallic Inorganic Materials at the TU Darmstadt. Instead, the researchers succeeded in achieving the displacement mechanically. They used a process in which the ceramics are mechanically deformed under controlled pressure and temperature conditions so the displacement can be imprinted in the ceramic. An approach such as this is trivial with metals, but until now it was largely deemed impossible with ceramics because of their tremendous hardness. Plus the surface of ceramic is extremely brittle and can easily break. In order to overcome these obstacles, the scientists carried out a mechanical imprint at 1150 degrees Celsius in a single crystal of the previously calculated optimised orientation.

This method now allows a well-ordered field of newly occupied atomic rows. These series control the local polarisation, the load dislocation, in the material. As the imprinted series clearly limit polarisation, it cannot lose structure even under very high operating conditions. In the operation of electroceramics, the material areas now delimited by the series (displacements) take up certain charge shifts; continuing with the football analogy, it is as if the Bayern fans were to lean forward or to the side in sections. As these material areas do not change under high conditions, no energy is converted by internal friction and the material behaviour remains stable.

These materials now make it possible to ensure consistent properties even at raised temperatures and with increased energy use. At the same time, the researchers are addressing the cost reduction necessary in order to provide the displacements by means of several options of mechanical imprinting.